GBPUSD has been making tiny steps within the 1.2400 area in the four-hour chart over the past two days, sending an early warning that some volatility, or a more noticeable move, may soon emerge in the market.

Technically, there are several reasons to believe that a downside correction is more likely to occur. First, the price hit a strong wall in the crossroads of a support-turned-resistance trendline and a downward-sloping trendline on Wednesday and instead drifted lower, keeping the downtrend started earlier this month intact. Secondly, the red Tenkan-sen has just crossed below the blue Kjun-sen line, while the RSI seems to be reversing south again within the bearish zone. The unsuccessful attempt to break above the 50% Fibonacci of the upleg from 1.2074 to 1.2812 could be another negative signal.

Should the bulls retake control, the 50% Fibo line of 1.2443 will come again under the spotlight, while in a short distance, the 20-period simple moving average (SMA) managed to block upside corrections on Thursday and therefore will be closely watched as well. Should the former resistance around 1.2480 and the descending trendline prove easy to clear, the rally could gear towards the 38.2% Fibonacci of 1.2530. Higher, all attention will shift to the ascending trendline.

In brief, GBPUSD is expected to show negative momentum in the short-run, with sellers turning stronger below 1.2387. 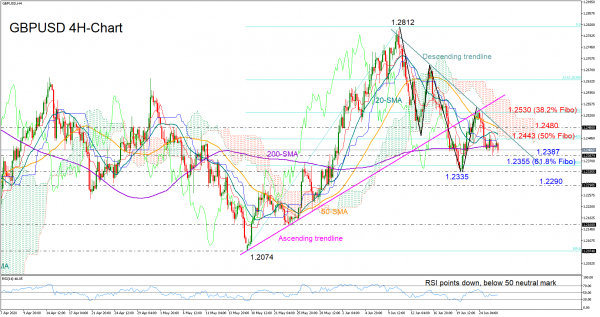