USDJPY appears to be maintaining a horizontal trajectory trapped between the 200-period simple moving average (SMA) and the 50-period SMA. A paused state of directional momentum is reflected in the Ichimoku lines, while the price rests around the upper surface of the Ichimoku cloud.

The mixed signals in the short-term oscillators further reflect the stall in the price. The MACD has barely inched above its red trigger line in the positive region, while the RSI improves from its neutral mark. However, the stochastic %K line promotes weakness as it has completed a negative overlap with the %D line.

Summarizing, initially the confines of 106.75 or 107.67 would need to be breached to revive directional momentum. Yet, the short-to-medium term picture remains neutral and a break either above 109.85 or below 106.00 would be required to set the next clear course. 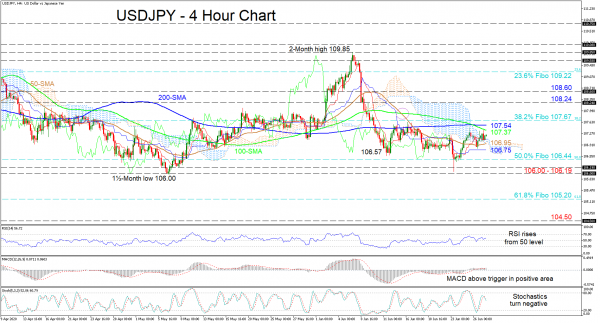