USDCAD is presently tackling the restricting 200-period simple moving average residing at the 1.3680 level, that being the 50.0% Fibonacci retracement of the down leg from 1.4047 to 1.3314. The existing bullish tone in the 50- and 100-period SMAs and the positive bearing of the Ichimoku lines further back additional price advances.

The technical indicators also back an improving picture in the short term timeframe. The MACD, in spite of having dipped below its red signal line in the positive section, looks may move back above it, while the RSI is rising in positive territory. Moreover, with room to move the stochastic oscillator promotes price gains as the %K line has completed a bullish overlap near the 30 mark.

To the upside, resistance may originate from the immediate 50.0% Fibo of 1.3680, where the 200-period SMA is also located. A thrust above this major barrier would need to be sustained to overrun the nearby 1.3715 – 1.3737 resistance trench, in order to preserve the climb. Moving higher, buyers could encounter some difficulty in the region from the 1.3832 high until the 76.4% Fibo of 1.3874, as this region limited downside moves in the past. Surpassing this, the price may shoot towards the 1.3970 obstacle before targeting the 1.4047 peak.

Otherwise, if the 200-period SMA curbs positive price action, early friction could arise from the blue Kijun-sen line at 1.3620 ahead of the 50-period SMA around the 38.2% Fibo of 1.3594. Should the price sink lower into the Ichimoku cloud, the 100-period SMA at 1.3557 could provide support preceding the 1.3485 critical trough. Losing more ground may turn the focus to the 1.3356 hurdle.

Overall, USDCAD remains positive above 1.3485. Overtaking the vital 200-period SMA at 1.3680, a very short-term bullish picture may endure, provided the pair follows with a break above 1.3737. 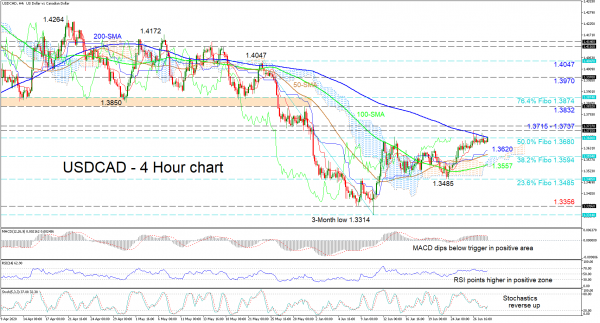 USD/CAD Yawns Despite Strong Data in Canada, US

EURUSD Pulls Back from 4-Month High; Bullish in Medium Term

USD Index: Dollar Remains Firmly in Red after US Data and Looks for Repeated Attack at Key Support