GBPJPY managed to unlock a three-week high at 135.90 on Thursday, but gains were soon reversed, creating a bearish shooting star candlestick instead – a negative signal that a downside correction may be on the way.

With the 50% Fibonacci of the 147.94-124.00 strongly rejecting upside movements at the same point and the Stochastics sloping downwards after peaking above their 80 oversold mark, weakness could persist in the short-term.

However, not far below, the ascending trendline that has been supporting the market since the slump in March, and the 38.2% Fibonacci of 133.15, could come to the rescue once again. In case they fail to hold, the previous low of 131.74 may immediately add some footing, deterring any decline towards May’s trough of 129.28, which is slightly below the 23.6% Fibo.

In the event of an upside reversal, the bulls would initially target the 50% Fibo of 135.97, a break of which would open the way towards the descending trendline stretched from the 147.94 top. Should the price crawl above that line, closing above the 61.8% Fibonacci of 138.80 too, the rally could get new legs towards the 140.85 restrictive zone.

Looking at the bigger picture, a steeper increase above 144.94 is required to resume hopes of an up-trending market.

Summarizing, the short-term risk for GBPJPY is tilted to the downside, with the confirmation likely coming below 133.15. 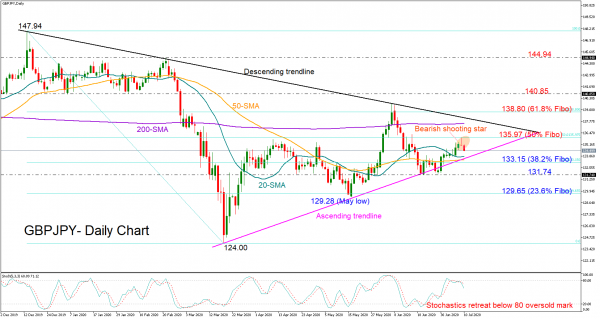