Gold inched to a fresh record high of 1,989 on Monday before pulling slightly back as rising infection cases and a turbulent budget debate in the US shifted more funds towards safe havens.

The yellow metal has been in the green over the past eight weeks, building its two-year-old uptrend above its simple moving averages (SMAs). While the positive trajectory keeps the bias positive, some caution should be warranted as a bearish divergence seems to be forming between the price and the momentum indicators. Unlike the price, the RSI and the Stochastics did not search fresh peaks in the overbought zone but reversed lower instead. Moreover, the MACD has been rising at a slower pace recently, signalling that the bullish action may be losing steam.

Nevertheless, gold has been facing strong support around 1,939 over the past few days, while a bit lower, the red Tenkan-sen line at 1,913 has also been restrictive to downside corrections, so the bears may not take full control as long as these barriers remain in place. In the event the latter falls apart, selling pressure could accelerate towards the 20-day SMA at 1,870, a break of which could immediately see the retest of the ascending trendline. Another step lower would put the uptrend at risk, likely bringing the 50-day SMA at 1,789 next under the spotlight.

In the positive scenario where the bulls keep the lead, the price may attempt to cross above the 2,000 level and rally towards the 2,050 and 2,100 psychological levels.

Summarizing, gold is sending cautiously bullish short-term signals. However, no decline could raise concerns other than a decisive close below the 1,939-1,913 area. 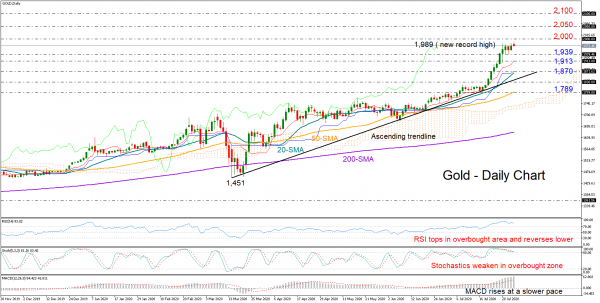 Gold Sellers Are Waiting In The Ambush