WTI crude oil futures had a strong selling interest over the previous, touching the 40-period simple moving average (SMA) and the Ichimoku cloud. The commodity found resistance at the 200-period SMA and the technical indicators are falling aggressively. The RSI is standing in the negative territory, while the MACD stands below the trigger line in the positive area.

In the light of more negative pressures, initial tough support could develop from the 38.43 support before meeting the lower surface of the Ichimoku cloud at 37.22. Pushing under the neutral cloud, the next support would come from the 36.64 ahead of the three-month trough of 36.11.

In brief, the very short-term bias is neutral-to-bearish slightly above the cloud. A break either above the 200-period SMA or below 36.11 could reveal the next direction. 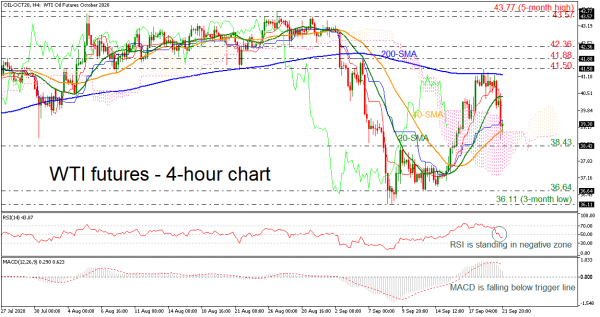 Oil is Weak Early in the Week