USDCAD climbed as high as 1.3400 on Thursday after jumping out of the six-month old descending channel and overcoming a long-term ascending trendline that has been stubbornly acting as resistance over the past four weeks.

The bullish move raised speculation that the bearish phase may have come to an end and it is time to change direction to the upside, though some barriers still need to be removed in the short-term for the rally to continue.

Note that the MACD is strengthening within the positive area for the first time in six months. In other signals, the RSI is showing some weakness at a time when the Stochastics are preparing to exit the overbought area, but it is still well above its 50 neutral mark, hinting that the bulls may dominate although some softness in the price cannot be ruled out. A positive cross between the 20- and 50-day SMAs could further boost buying appetite.

Nevertheless, if sellers retake the reins, the 50-day SMA and the long-term ascending trendline may immediately add some footing around 1.3257 before the 20-day SMA currently at 1.3187 comes into view. A closure below the 1.3128 support area would eliminate hopes of an up-trending market, likely squeezing the price towards the 1.3038 hurdle and the 1.2993 bottom.

Meanwhile, in the medium-term picture, the lower highs, and the lower lows from the 1.4667 peak keep the outlook negative. A rally above the 38.2% Fibonacci of 1.3632 is required to change that to neutral.

In brief, USDCAD is expected to keep recovering if it manages to remove the 1.3388 barrier. In the medium-term, it should push harder to break above 1.3632 to upgrade the outlook to neutral. 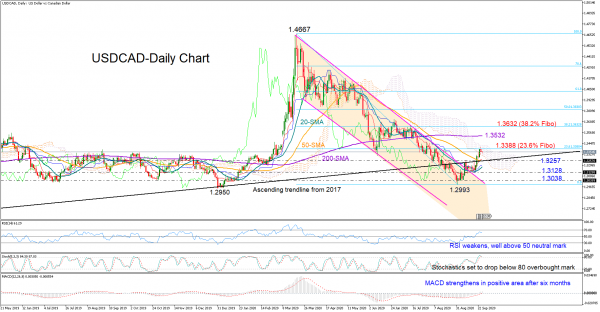 EURUSD Under Pressure After ECB Comments