USDJPY surged above the 20- and 40-period simple moving averages (SMAs), flirting with the Ichimoku cloud and surpassing the 104.00 psychological level. The RSI is sloping north, resting around the 50 level, though the MACD oscillator is still moving sideways in the negative territory in the 4-hour chart.

If buying interest picks up, early tough resistance could occur at the upper surface of the cloud around 104.66. A violation of this level may shoot the pair to challenge 104.76 and the 105.14 barrier. If advances endure past these obstacles, buyers may then target the 105.65-105.75 region.

Otherwise, if sellers sink the pair lower, the 103.68-103.81 support could provide the initial key constrictions necessary to sustain the climb. Steeper declines would have to tackle a more durable support at the eight-month low of 103.17.

Overall, the very near-term picture remains neutral-to-negative despite the aggressive rally earlier today, while a break below 103.17 would cement negative worries. 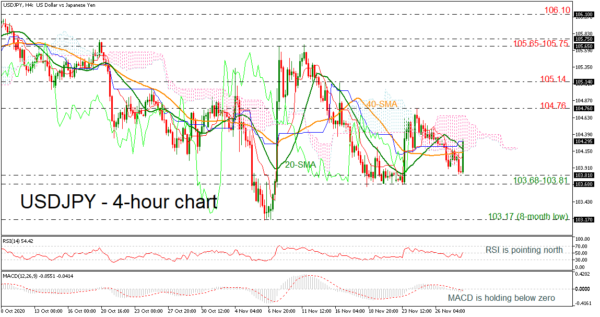