EURJPY is making another attempt to break above the 128.00 level, which was a tough obstacle to pass over the past couple of days despite the spikes above it.

The RSI and the MACD suggest the bulls may not abandon the game yet as the former is picking up steam above its 50 neutral mark and the latter seems to be regaining strength above its red signal line.

If the rising red Tenkan-sen currently at 127.55 continues to provide a strong footing, the pair may soon revisit its recent peak of 128.44. A violation at this point would put the market back in an uptrend, confirming a stronger bullish bias. In this case, resistance could be next found within the 129.30 – 130.00 region – a key restrictive zone during 2018. Beyond that, the 130.75 – 131.00 zone could be another spot for a downside reversal.

Alternatively, the short-term structure would switch back to neutral if the price retreats below 127.50, though some optimism may stay intact if the 20-day simple moving average (SMA) and the ascending trendline manage to catch the fall near 127.00. The former resistance zone around 126.40 may gather some interest ahead of the 125.75 supportive zone.

Overall, EURJPY’s ascend continues to look encouraging as long as it holds above the upward-sloping trendline. Only a move below 125.00 could eliminate confidence in the upward pattern. In the very short-term picture, the pair should hold above 127.50 in order to keep buying interest alive. 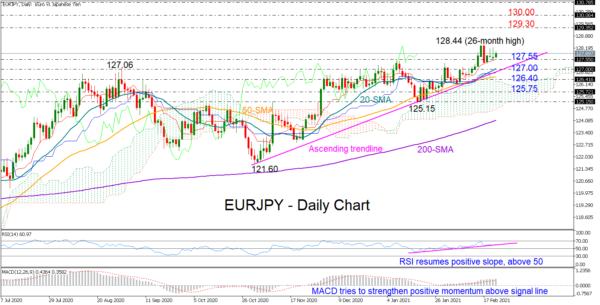