GBPUSD is trailing the upper Bollinger band hiking to a new 34-month high of 1.4085. The pair is exhibiting a sturdy positive tone, something also reflected in the short-term oscillators. The price is steadily progressing above the climbing simple moving averages (SMAs), which are conveying a predominant bullish demeanour.

The MACD, in the positive zone, is rising above its red trigger line, while the RSI is preserving its push into the overbought territory. Furthermore, the stochastic oscillator is persisting above the 80 mark with the %K line reflecting a slight stalling in the upwards drive, however, the %K line has yet to confirm any clear deterioration in the price.

If the upwards trajectory continues, initial constraints could commence at the 1.4144 barrier. Overrunning this obstacle, the price could then propel to challenge a key resistance band of 1.4345-1.4376. If buyers manage to prolong the rally, overstepping this critical border too, the bulls may then target the 1.4615 boundary, identified in June 2016.

Otherwise, if sellers resurface, early support could develop from the 1.4000 hurdle until the 1.3951 inside swing high. Should a pullback evolve strong downside limitations may quickly appear from the zone of 1.3757-1.3828, which also contains the mid-Bollinger band. If an even deeper retracement matures, the pair may then test the 50-day SMA at 1.3672, while a dive past it, could be dismissed by the 1.3519-1.3564 boundary, which is reinforced by the lower Bollinger band.

Summarizing, GBPUSD’s five-month climb appears durable above the SMAs and the 1.3757-1.3828 support region. 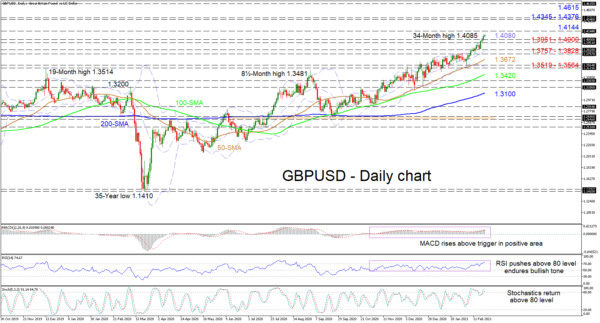