GBPJPY has been on the sidelines mostly this week as the 151.00 level and the short-term simple moving averages (SMAs) seem to be a real struggle for the bulls. Technically, the price could lose some ground in the near-term as the MACD is continuing the direction to the downside and towards its zero neutral mark, though the stochastics are warning over an oversold market, creating bullish cross within %K and %D lines.

A rebound off the 149.50 support and near the upper surface of the Ichimoku cloud, however, could keep the pair on the uptrend started from the 123.95 low in March 2020. Should the price overcome the 151.00 mark, resistance could run up to the three-year high of 153.40. Higher, the 154.00 psychological number, registered in April 2018 may also prove a challenge.

In the very short-term picture, GBPJPY is gently pointing down over the past two weeks, framing a negative profile.

Looking at the bigger outlook, a strong rally above 153.40 would extend the upward pattern, making the outlook even more bullish, while a decisive close below the 200-day SMA at 141.33 would confirm the start of a downtrend.

In brief, GBPJPY could lose further steam in the short term, while in the long-term the pair continues to hold a positive outlook. 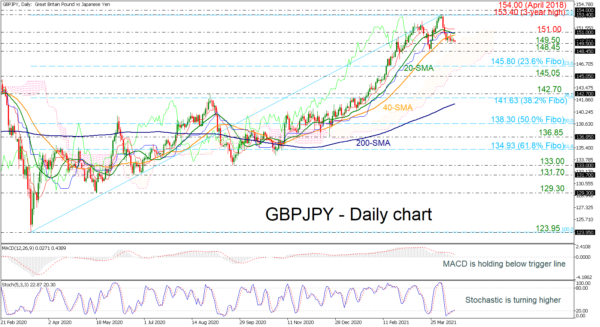