Gold seems to have reacquired some of its shine after the positive pivot at the 1,723 level. Surpassing the 1,759 upper frontier of the short-lived sideways market has resurrected the upside bias. The commodity’s recent climb is confirmed with bullish signals by a formed inverted hammer, followed by an engulfing bullish candle as the price steered clearly over the aforementioned 1,759 ceiling. The downward slopes of the 50- and 100-day simple moving averages (SMAs) have flattened out, reflecting opposing forces to downward momentum.

The improving Ichimoku lines and the short-term oscillators are suggesting a condition of growing upwards strength. The MACD is rising above its red trigger and zero lines, while the RSI is advancing in bullish territory. Furthermore, the stochastic oscillator is sustaining a positive charge as its %K line soars above the 80 level.

Maintaining the current trajectory, buyers may face early resistance from the 100-day SMA at 1,802 ahead of the 1,816 high, and adjoining upper surface of the cloud at 1,819. To instil additional belief in the latest positive impetus, the price would need to propel above the 200-day SMA around 1,857 and the nearby border of 1,876. Moreover, a breach of the key 1,900 handle would then cement gold’s objective to pilot higher.

Otherwise, if sellers resurface, initial downside limitations could evolve around the 1,759 mark, an area reinforced by the red Tenkan-sen line and the 50-day SMA, as well as a possibly forming supportive trend line. Diving from here, the clouds’ lower band around 1,734 could come into focus ahead of the 1,723 low. Should these support obstacles fail to dismiss negative tendencies, the key foundation of 1,660-1,680, and the April 2020 trough of 1,643 could draw strong focus.

Summarizing, gold’s new found glow may be the light at the end of the tunnel. However, for the short-term bullish picture to mature, the price would need to overstep the 1,816 high and the Ichimoku cloud. 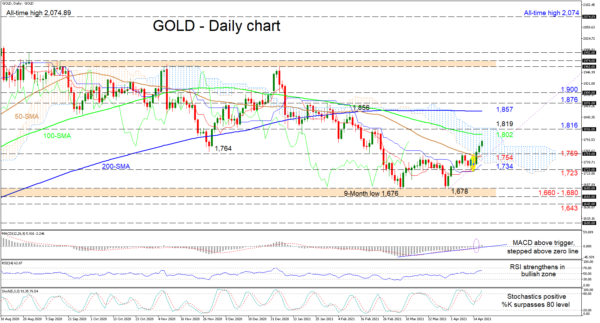