Fed Meeting: No Taper Talk, But Mind the Dots

All eyes will be on the Fed when it concludes its meeting at 18:00 GMT Wednesday. It is probably too early for a discussion about an exit strategy from cheap money, but the famous ‘dot plot’ of interest rate forecasts might show a rate hike for 2023. That could lift the battered dollar a little, although any real strength is a story for late summer.

Fed to steer away from taper signals

The US economy is running on all cylinders, with inflation heating up and consumption recovering nicely thanks to the monster spending packages by the federal government. Inflation is now running at 5% in annual terms, a pace that would normally have markets panicking about higher rates being imminent, to bring it under control.

The main reason we are not talking about rate increases already is the mediocre performance of the labor market lately. Despite the avalanche of spending, employment levels are still far away from their pre-crisis glory. Some blame the generous unemployment benefits for keeping workers from actively looking for new jobs. 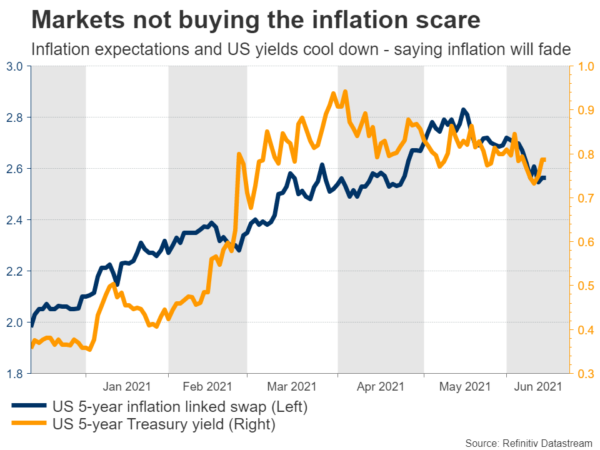 In turn, this softness is making the Fed confident that the current inflation shock comes down to supply chain disruptions and will indeed fade soon. If full employment is still miles away, it’s difficult to sustain high inflation as consumers just don’t have the pockets to keep the spending going. The market agrees, with longer-term inflation expectations remaining in check and even declining a little lately.

All this implies that the Fed is unlikely to begin a discussion around an exit plan from asset purchases at this meeting. Chairman Powell might indicate that a discussion is moving closer, but hasn’t started yet.

The Fed will also release updated economic and interest rate forecasts. The inflation estimates will likely reflect the Fed’s ‘transitory’ view, though the ‘dot plot’ of interest rate projections could be more exciting.

Last time, it showed that policymakers as a whole didn’t expect a rate increase until 2024. This time it could signal a hike in 2023, as the economy has continued to exceed expectations and new spending packages are in the pipeline. 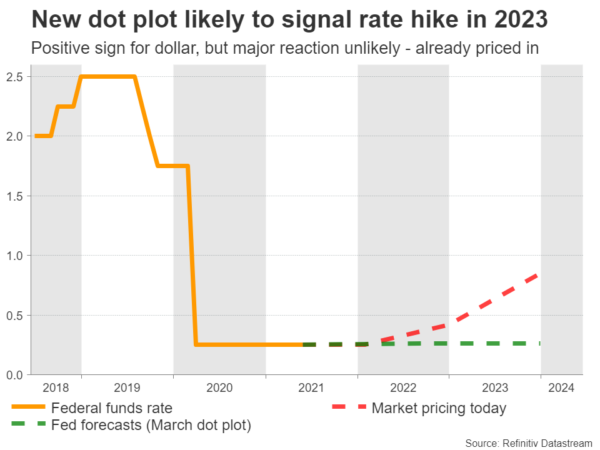 This would typically be a hawkish sign, arguing for a boost in the dollar. However, any market reaction might be minor as markets have already priced in two rate hike for 2023, so this wouldn’t be any huge surprise.

Even if the Fed supports the dollar a little this week, it is unlikely to be a complete game-changer. Policymakers want to avoid market panic, so they will probably try to make the tapering process as slow and gentle as possible. This means only tiny steps towards normalization.

The real shift may come in late August at the Jackson Hole economic symposium. By then the US jobs market will be even stronger and the Fed could signal that tapering discussions will officially begin at the September meeting, preparing the markets for that over the summer.

For the dollar, this implies that any real strength is probably a story for late summer or early autumn. When it becomes clear the next move is for the Fed to tighten liquidity, the reserve currency could come back to life again, particularly against low-yielding currencies whose central banks won’t move in the same direction, like the yen and franc.

Taking a technical look at dollar/yen, the recent high of 110.30 could offer immediate resistance to further advances. A break might open the door for another test of the March peak at 110.95.

On the downside, preliminary support to declines may come from the 109.15 zone, which also encompasses the 50-day moving average. Even lower, the focus would turn towards the 108.55 region.