The Euro dipped against the dollar after report said the ECB policymakers are worried about Euro’s strength. This may raise chances of a delay in decision about QE tapering. Sources said that asset purchase program could be phase out only slowly. According to the initial schedule the program is due to expire at the end of 2017, but it looks quite unlikely that the ECB will take any decision in their policy meeting next week, as formal talks about next steps on QE program are only beginning. Likely scenario is for gradual rather than rapid reduction in asset buying, especially in the zone’s weaker economies, in rising worries that stronger Euro could further dampen inflation and slow down economic growth. The asset purchase program, also known as Quantitative easing was launched 2 1/2 years ago in order to revive growth and boost inflation and ECB’s President Mario Draghi said that the program will continue until the central bank sees inflation consistent with its target of just below 2%. In addition to the latest news, technicals are also favoring further weakness which could extend, as completion of reversal pattern and Wednesday’s long bearish candle continue to weigh. The EURUSD pair is focusing next support at 1.1811 (20SMA) and 1.1790 (30SMA) after fresh bears cracked initial support, provided by rising 10SMA. 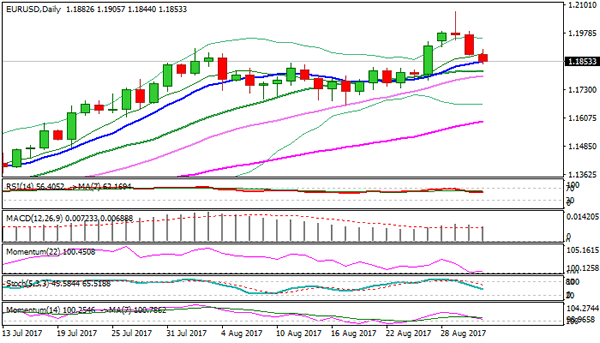