EURGBP lost some steam yesterday as the pair retreated from Wednesday’s near 8-year high of 0.9306. The pull-back was expected given that the RSI had risen to extremely overbought territory. Another signal for a downside reversal came from the Bollinger bands. Prices had been trading close to the upper Bollinger band since the beginning of August and spiked above it on Wednesday.

The RSI is slightly up today and approaching the 70 level again, suggesting the near-term bias remains strongly bullish despite the easing of the upside momentum.

Should there be a further deterioration in the short-term bias, support is expected to come from the middle Bollinger band at around 0.9140. Further down, the previous support area around 0.9080 and the key 0.90 level will likely act as support. A breach of these levels would open the way towards the lower Bollinger band, which is currently just above the 50-day moving average, marking the region around 0.8980 as another important support area.

On the upside, the October 2016 peak of 0.9260 has re-emerged as a strong resistance level during the past week, with prices struggling to close above this point. A daily close above 0.9260 should enable the pair to challenge this week’s high of 0.9306. A break above this level would bring into view the psychological 0.94 handle.

Looking at the medium-term outlook, the strong bullish structure remains intact, with price action sharply above the upward sloping 50- and 200-day moving averages. 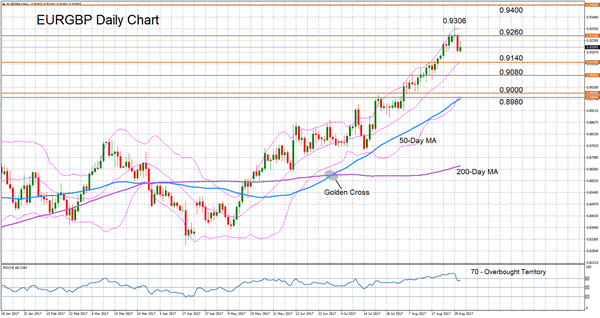