The GBP/USD extends the latest gains as the dollar was ruined by the huge Unemployment Claims reported in the previous week. The Initial Claims have reached the highest level since March 5, 2015, this situation will force the Federal Reserve to keep the rate unchanged for a longer period.

Price keeps rallying as the USDX is too heavy to be stopped, has dropped as much as 91.04 level and will hit the 91.00 psychological level. A further drop will send the USD into agony, right now we don’t have any reversal signs.

The Cable drags the price higher and should reach and retest the first warning line (wl1) very soon if the USDX will hit new lows. Is strongly bullish on the daily chart and is expected to reach at least the 1.3266 previous high.

Only a failure to take out the resistance from the previous high will signal a minor range on the short term. I’ve drawn a minor red ascending pitchfork to encapsulate the upside movement, could find temporary resistance at the median line (ml), but the target could be at the upper median line. 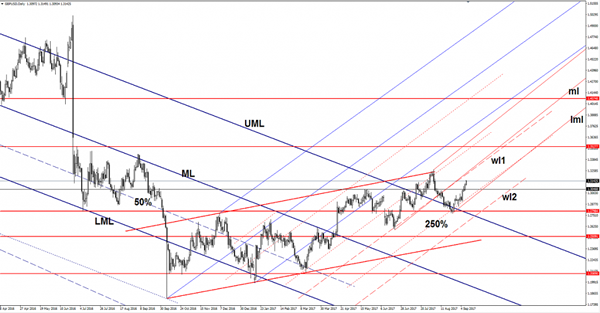