USDCAD has marked yet more lower highs and lower lows due to lingering negative forces. Moreover, the pair is also trading well below its 50- and 200-period simple moving average (SMA), and has recently completed a ‘death cross’ where the 50-period SMA has crossed below the 200-period SMA, increasing fears of a sustained bearish outlook.

Short-term momentum indicators are supporting a mixed picture as the RSI is located below its 50 neutral mark. However, despite the MACD being below zero, it is found above its red signal line, indicating that the negative bias might be fading.

Should the bears remain in charge, initial support might be found at the 1.2489 hurdle. A decisive move below this point could send the price to test the 1.2452 level. A break below the latter could increase selling pressures, shifting sellers attention towards the mid-November low at 1.2386.

On the flip side, should buyers regain control, initial resistance might be found at the 1.2569 barrier before shifting their attention towards the 50-period SMA currently at 1.2596. Crossing above the latter, the pair could  test the congested region which includes the 1.2606 and the 1.2620 obstacles. A break above that area could induce further buying activity, opening the door towards the 200-period SMA currently at 1.2738.

In brief, the overall outlook for the bear is bearish. For sentiment to change, sellers would need to break above the 50-period SMA. 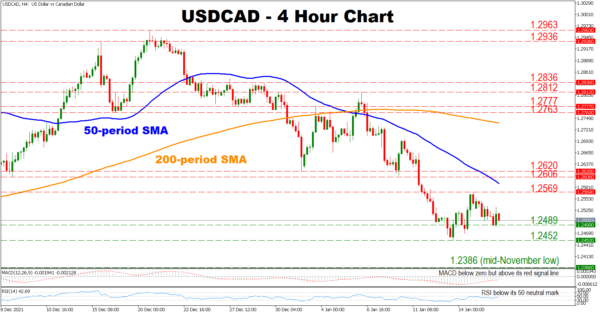