Sterling falls further on Friday and breaks below 1.14 mark vs dollar, trading at the lowest levels since 1985 during the European session.

In addition to persisting pressure from strong dollar on expectations for another massive Fed rate hike, pound was driven lower on Friday by much weaker than expected UK retail sales, which dropped by 1.6% in August after 0.4% rise in July and also well below forecasted 0.7% fall.

August drop is the biggest since December 2021and adds to warnings that the economy is sliding into recession, as consumer spending is getting squeezed more on soaring cost of living.

Break of very important 1.14 zone (lows of post-Brexit vote fall in 2016 and pandemic in 2020) would risk stronger acceleration and unmask psychological 1.10 support.

Bearish daily and weekly studies support the action, with additional negative signal seen on formation of bearish engulfing pattern on weekly chart, though oversold condition warn that bears may take a breather before resuming.

All eyes are on two top events next week, policy meetings of the US Federal Reserve and the Bank of England.

The Fed is widely expected to deliver another 75 basis points, but with significant percentage of those who bet for a massive 1% raise, while the BoE is likely to go for another 50 basis points hike. 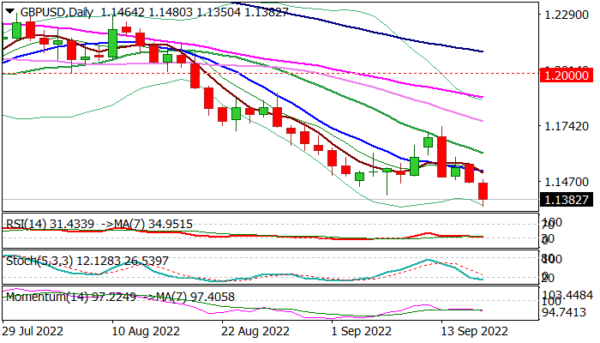