EURJPY notches a fifth day of gains, having retraced more than half of the latest bearish wave to climb to a two-week high of 142.89 on Tuesday.

From a technical perspective, the bullish mode could persist in the short term, given the positive slope in the RSI and the MACD. However, with the latter fluctuating below its red signal line and the stochastics losing pace above the 80 overbought level, traders may preserve some skepticism.

Moreover, the 20-day simple moving average (SMA), has been capping upside pressures over the past three days and may remain an area of caution at 142.16. If the bulls close above that line, crossing above the 143.00 round level too, the key 144.00 resistance territory could immediately block the way higher. If not, upside pressures may intensify, towards the long-term ascending line drawn from August 2020, seen around 147.00. Beyond that, the rally could pick up steam to meet the 2014 top of 149.76 and the 150 psychological mark.

In the event the price pulls below the 20-day SMA, support could initially develop around the 50-day SMA at 139.00. Driving lower, sellers may encounter the tentative descending trendline near 137.50 before they challenge the 200-day SMA and the surface of the broken bearish channel both at 136.00.

Summarizing, EURJPY has the potential for further bullish development, though only an extension above 147.00 would re-activate the long-term uptrend. 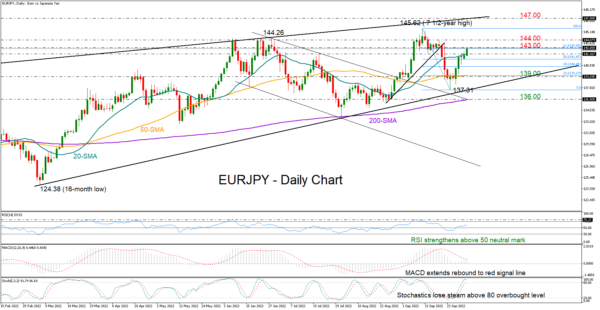