USDJPY is struggling to surpass the 145.00 psychological mark and have a closing day above it, switching the short-term picture from bullish to neutral.

The technical oscillators are suggesting a bearish move as the stochastic is moving towards the oversold zone, while the MACD is standing beneath its trigger line. The 20-day simple moving average (SMA) is acting as a strong support level and any bearish movements may push the market towards the long-term ascending trend line.

More declines may challenge the 50-day SMA near the 139.35 barrier and a break beneath these lines could open the way for the 137.40 and 135.55 barrier, changing the outlook to negative.

On the other hand, a successful climb above the 145.00 round number could add to the optimism for a retest of the previous peak of 145.90, which is a 24-year high. If buying interest intensifies then the pair may move towards the 146.83-147.70 restrictive zone.

All in all, USDJPY has been in a consolidation area since September 7; however, the broader outlook remains strongly bullish. 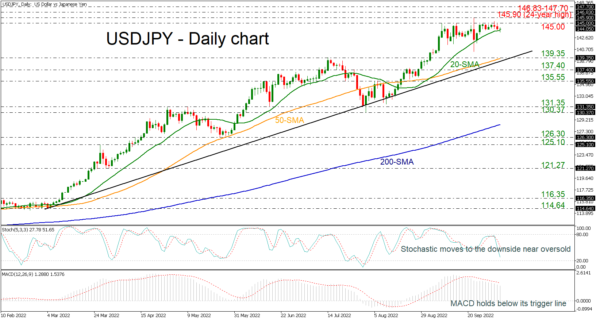