Spot gold price jumped on Tuesday, lifted by weaker dollar on the latest speculations that the Fed may temper its aggressive policy stance from next month.

The yellow metal advanced around 1.2% since opening in Asia and retraced over 50% of the recent $1674/$1630 bear-leg, although daily studies remain bearishly aligned as 14-d momentum is in negative territory and MA’s predominantly in bearish setup.

Fed’s decision on conclusion of two-day policy meeting on Wednesday will be a key for gold’s near-term direction.

The central bank is likely to deliver another 75 basis points hike on Wednesday, but signals about their next steps will be crucial.

In hawkish scenario, with extended aggressive stance by the Fed, the metal would lose ground and attack at a temporary base at $1614/17 double-bottom, loss of which would risk test of psychological $1600 level and possible extension below here.

On the other side, recovery may accelerate and attack key near-term barrier at $1674 (Oct 26 lower top), break of which would open way for stronger recovery on completion of failure swing pattern on daily chart. 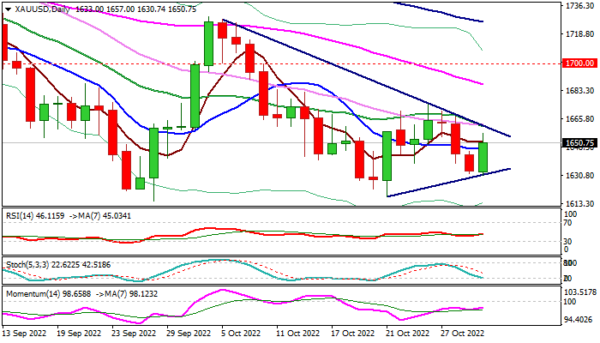