USDJPY Exposed to More Downside in the Short-Term

USDJPY stretched its November’s losses towards the 50-day simple moving average (SMA) and close to the 145.00 round-level on Tuesday as the US midterm election results started to roll in.

The momentum indicators point to more declines ahead as the RSI is weakening below its 50 neutral mark and the MACD is decelerating below its red signal line. The stochastics are in downward move too, though within a short distance from their 20 oversold level, suggesting that the bearish wave in the price could soon take a breather.

Should the 145.00 mark give way, the bearish correction could immediately pause near the 38.2% Fibonacci retracement of the 130.38-151.93 upleg at 143.70. Note that the lower boundary of a short-term descending channel and the tentative ascending trendline from August’s low of 130.38 are currently intersecting each other around the same region. Hence, a decisive close lower may trigger an extension straight to the 142.10 constraining zone and then towards the 140.00 psychological mark. A step below July’s high of 139.37 would confirm a neutral outlook in the medium-term picture.

On the upside, the 145.89 barrier has resumed its resistance role and is currently keeping the bulls under control. A step higher could face a more challenging session between the 23.6% Fibonacci of 146.85 and the channel’s upper band at 148.00, where the 20-day SMA is currently lying. If that wall collapses, the focus will fall on the 150.00 key number, while beyond that, the door will open for the 32-year high of 151.93.

In brief,  the latest downturn in USDJPY is expected to continue in the short-term, with traders likely looking for immediate support around 143.70. 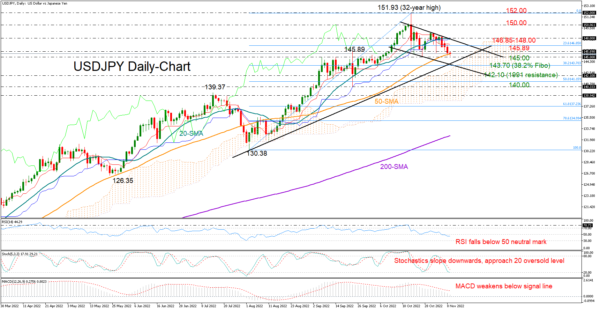