The USDJPY is consolidating in early Friday after suffering heavy losses on Thursday, when the pair was down 550 pips (3.8%) in the biggest one day drop since 1998.

The dollar was hit strongly by cooler than expected US Oct CPI data which suggest that inflation may have peaked, and the Fed could start easing its aggressive policy tightening.

Additional pressure on greenback could be expected from decision of Chinese health authorities to ease some of tough Covid restrictions, which would improve the risk sentiment.

Bears faced headwinds on approach to psychological 140 support and were contained by 100DMA (140.78), with a breather at this zone likely to precede fresh push lower and upticks on a partial profit-taking to provide better levels to re-enter bearish market.

Thursday’s massive bearish daily candle weighs heavily, along with large weekly candle (the pair is on track for a weekly drop of around 4%). 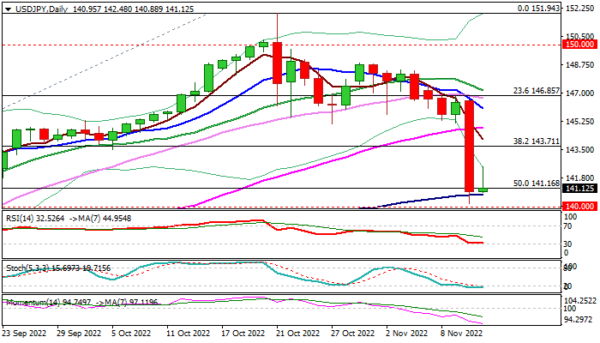