Bears are pausing for the second day after being accelerated by lower than expected inflation numbers which suggested that the Fed may ease its aggressive policy tightening stance, but better than expected US retail sales in October questioned bears, prompting traders to stay on hold and await more signals.

On the other side, signals of stall and possible bounce are developing on a weekly chart, where long-legged Doji is forming, stochastic is oversold and momentum indicator overextended, with oversold daily studies contributing to the notion.

Markets need to digest data which suggest that the US economy may enter the upward trajectory and escape from recession, however, pressure on dollar over Fed’s potential downsizing interest rate hikes would likely persist.

Overall structure on all larger timeframes remains bearish, as reversal pattern has formed on monthly chart (though still requiring confirmation on monthly close below pivotal Fibo level at 104.95 )38.2% of 89.15/114.72).

Oversold weekly and daily studies suggest limited recovery, which should be capped under 109.00 zone (100DMA / 20WMA) to keep bears in play.

Expect initial positive signal on close above 107.14 (Monday’s high / lower 20-d Bollinger band) which would look for a verification on lift and violation of falling 10DMA (108.02).

Conversely, repeated close below 106.42 Fibo support would signal that recovery attempts lose traction and bears keep control, though firmer bearish signal to be expected on drop below Tuesday’s spike low (105.15) which would signal attack at 200DMA. 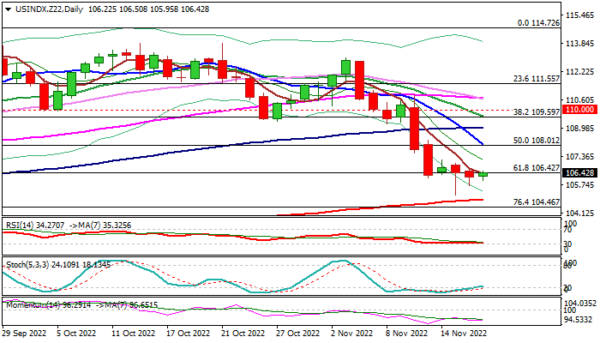