NZDUSD came under pressure marginally below the August high of 0.6467 at the start of the week, having gained almost 15% since the bottom at a 31-month high of 0.5510 in mid-October.

Market sentiment may remain tepid, according to the momentum indicators. With the RSI losing steam near its 70 overbought mark, the stochastics struggling to post new highs above 80, and the MACD set to cross below its red signal line, a downside correction cannot be ruled out.

The bearish scenario, however, may not come into play unless the price retreats below the 0.6300 round-level and the 200-day simple moving average (SMA), which currently overlaps with the 50% Fibonacci retracement of the 0.7032-0.5510 downleg. The 20-day SMA could next support the market around 0.6212. If selling forces dominate, the decline could stretch towards the 38.2% Fibonacci of 0.6093.

Alternatively, a close above the 0.6350 barrier could get an extension towards the August resistance area of 0.6467. Slightly higher, the 61.8% Fibonacci of 0.6550 could be another spot to keep a close eye. A successful move above that bar may stage a quick rally towards the crucial long-term descending trendline that joins all the highs from February 2021 at 0.6770. 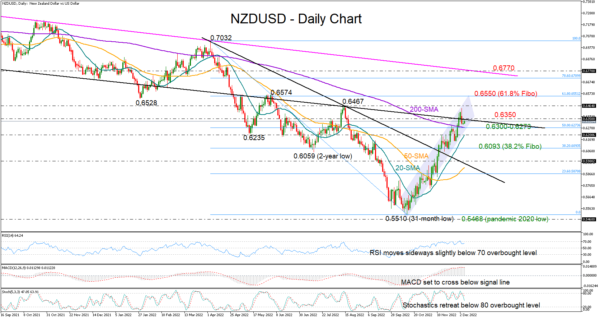