NZDUSD Eases after the Rally to 6-Month High

NZDUSD continued the impressive rally that started after the bounce off the 31-month low of 0.5510 during yesterday’s session, surging towards a new six-month peak of 0.6512. The pair penetrated the medium-term downtrend line to the upside in the preceding sessions, creating a steep short-term ascending trend line.

However, the MACD oscillator is moving sideways mirroring the downside retracement from the aforementioned high and today’s negative reaction, while the RSI is pointing slightly down near the overbought region.

In the event of a downside reversal, the golden cross within the 20- and the 200-day simple moving averages (SMA) at 0.6270 may ease the selling pressure ahead of the uptrend line at 0.6230. Failure to rebound off the latter, could take the pair to the 0.6150 support and the 50-day SMA, which coincides with the 0.6000 key level into view.

Alternatively, a continuation of the buying interest could open the way for a test of the 0.6570 barrier, achieved on June 3. Even higher, the 200-weekly SMA at 0.6625 may halt the positive movements.

All in all, NZDUSD is in a bullish territory in the short- and medium-term timeframes and only a drop beneath the 200-day SMA may switch the outlook back to bearish. 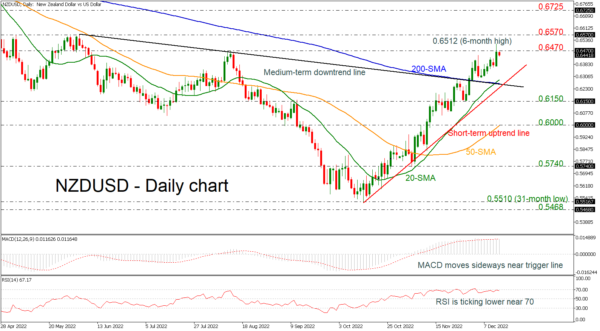