NZDUSD had experienced a prolonged downtrend since March, hitting a 31-month low of 0.5510 in early October. Even though the pair has posted a strong recovery since then, it is currently experiencing a pullback after its rebound came to halt at the six-month high of 0.6575.

The momentum indicators suggest that bearish forces have gained control. Specifically, the stochastic oscillator is descending after it failed to complete a bullish cross, while the MACD histogram has retreated further below its red signal line but remains in the positive zone.

Should the pair extend its decline, immediate support could be met at the 200-day simple moving average (SMA), currently at 0.6250. Dipping below that region, the bears could target 0.6155 before the focus shifts to the November support of 0.6063, which overlaps with the 50-day SMA. Even lower, the inside swing high of 0.5815 could halt any further retreats.

To the upside, bullish forces might propel the pair towards the August high of 0.6467. Conquering this barricade, the price could test the recent peak of 0.6512, which rejected the pair’s medium-term rebound. Surpassing that zone, the spotlight could turn to the June high of 0.6575.

Overall, NZDUSD seems to be experiencing a short-term downside correction after its rebound failed to strengthen. Hence, a clear break above the 0.6512 ceiling could signal the continuation of the pair’s recovery. 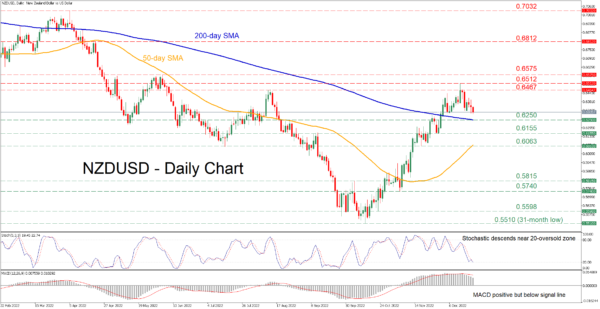