GBPJPY had been in an uptrend since late September, with the price posting a fresh 6½-year high of 172.10. However, after a period of consolidation, the pair experienced a huge downward spike on the back of the BoJ’s surprise decision and has been rangebound since then.

The momentum indicators suggest that bearish forces are intensifying. Specifically, the MACD histogram is extending its decline below both zero and its red signal line, while the stochastic oscillator is sloping downwards within the 20-oversold zone.

Should bearish pressures persist, the recent low of 158.58 could act as the first line of defence. Sliding beneath that floor, the price could descend towards the May bottom of 155.58 or lower to test the September support of 152.53. A violation of the latter could open the door for the March low of 151.00.

On the flipside, if buyers re-emerge and push the price higher, the pair may initially test the 161.00 hurdle. Piercing through that zone, the spotlight could turn to the inside swing low of 163.04, which might now act as resistance. Higher, further advances could then cease at the July resistance region of 166.31.

In brief, GBPJPY is trading without a clear direction after its significant downside move came to a halt. Hence, a break below its recent 2½-month low of 158.58 could reignite the bears’ hopes for a sustained decline. 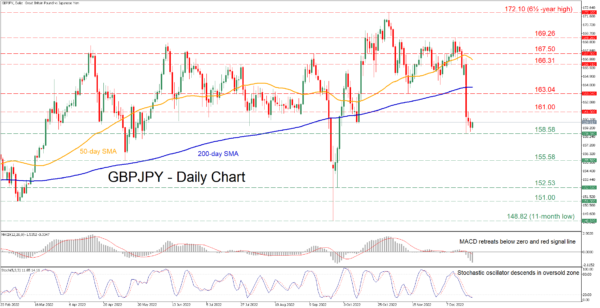