USD/JPY: Larger Downtrend to Resume after Taking Out Key Supports

The USDJPY keeps firm negative tone and dips to new lowest levels in over seven months on Friday, in extension of strong acceleration on Thursday, when the pair lost 2.3% of its value, in the biggest daily drop since Dec 20.

The dollar was deflated by growing expectations that the Fed would continue slow the pace of its rate hikes, following further easing of US inflation.

Also, Japanese yen received fresh support from talks that the Bank of Japan would soon start modifying its monetary policy, which is still unchanged, despite the other central banks already strongly tightened its monetary policies.

The pair is on track for the biggest weekly loss since late November and weekly close below psychological 130 support for the first time since June 2.

Broken 130 support reverted to solid barrier, along with 55WMA (131.12), marking significant resistance zone which should limit corrective upticks (as daily studies are oversold) and keep bears in play. 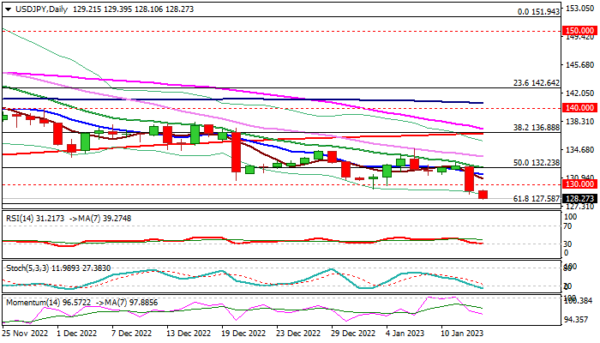