The euro holds steady as inflation slows down. With prices of oil and gas falling back, Europe could put the much-daunted winter behind. Inflation effectively decelerated in the Euro zone in December, which would give policymakers some relief. Easing pressures have triggered expectations that the ECB might reassess its tightening schedule. The prospect of a 25-bp increment in March following a 50-bp penciled in next month could drive the price action forward. The single currency has more upside should data suggest that economic fundamentals keep the recession at bay. The pair is to test 1.1100 with 1.0510 as a fresh support. 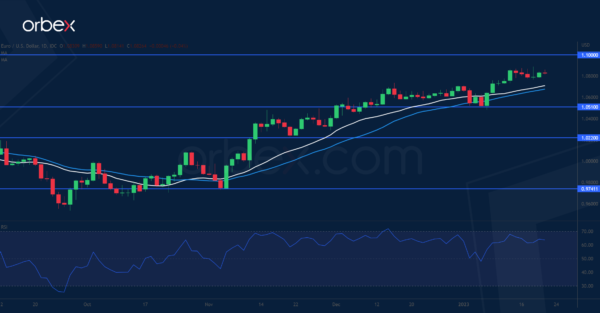 The Canadian dollar steadies as the market wagers on a 25-bp hike by the BoC. Inflation eased more than expected in December thanks to lower oil prices. But core components excluding food and energy remained high which shows that pressures notably from a tight job market still linger. The range bound price action suggests that traders expect both central banks to be near their peak rates. As their interest rates seemingly move in tandem, there is little opportunity for carry trades. What might set the US apart could be its resilience in case of a mild recession. The pair is testing the floor at 1.3230 and 1.3680 is a key resistance. 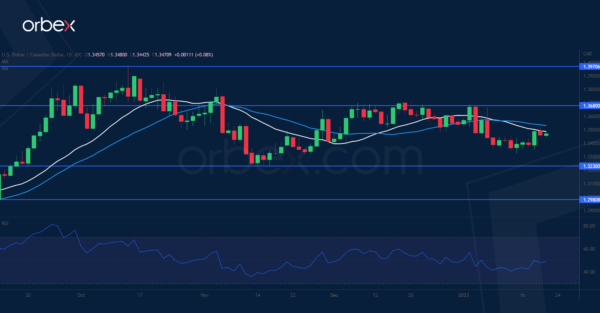 Brent crude softens as weak economic data rattle the market. Lacklustre performance across the commodity spectrum shows that traders still worry about the economic cost of the widespread policy tightening. Weak data out of the top consumers keep a lid on market sentiment. Disappointing US manufacturing output raises concerns of a hard-pushed soft-landing. While China recorded its worst growth since 1976 with GDP expanding by a mere 3.0% last year. Meanwhile, a surprise surge in US oil inventories tips the balance in favour of supply. The price is hovering between 70.00 and 89.00. 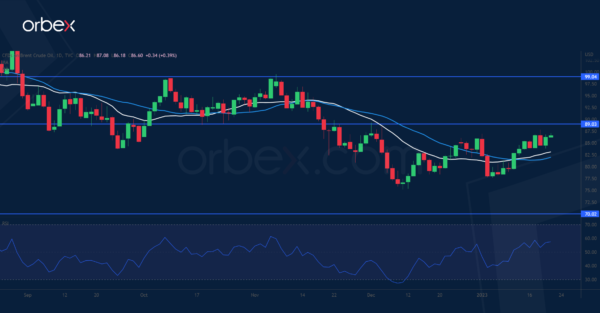 SPX 500 falls as earnings may disappoint

The S&P 500 slips as the market braces for a downtrend in earnings with the full impact of higher rates. The macroenvironment does not help with weak economic data and hawkish Fed comments being a rather bearish mix. The tightening has surely left its mark with producer prices and retail sales falling along the CPI. A feeble GDP reading could further fuel recession worries. Meanwhile, some officials’ insistence on pushing rates beyond 5% raises concerns of overshooting. After all, they were judged to be too slow to take the ‘transitory’ label off the inflation problem. The index is falling towards 3770. 4100 remains a key resistance. 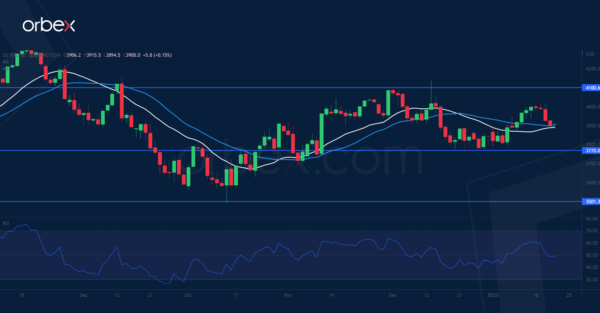