The Germany 30 index has rebounded after hitting a seven-week low of 11,703.80 during Monday’s trading. The index ended up gaining 1.0% during yesterday’s trading, while on Tuesday – at the time of writing – it is up by around 0.8%.

The Tenkan-sen line remains below the Kijun-sen line in support of a negative short-term bias, though the Kijun-sen has flatlined, an indication that downside short-term momentum is running out of steam. Moreover, the stochastics are giving a bullish signal in the very short-term as the %K line has crossed above the slow %D one and is heading higher.

Further advances might meet resistance around the current levels of the Tenkan- and Kijun-sen lines at 12,078.15 and 12,158.65 respectively, with the area around the Ichimoku cloud bottom at 12,466.52 next coming into view as an additional barrier to the upside – this area was a rather congested one recently.

In case of declines, the range around a previous bottom at 11,866.20, that also encapsulates the 11,900 round figure, might provide support. Further below, the attention would shift to the range around yesterday’s seven-week low of 11,703.80 for additional support, with the one-year low of 11,691.60 from February 6 also being part of this area.

The medium-term picture is looking negative, with price action taking place below the 50- and 100-day moving average lines, as well as below the Ichimoku cloud. A bearish cross was also recorded around mid-February when the 50-day MA moved below the 100-day one.

Overall, the short-term bias is looking partially bearish – though a bullish signal is in place in the very short-term – with the medium-term outlook looking negative at the moment. 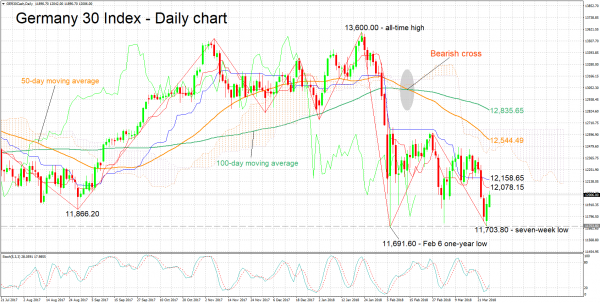