The Euro found support around the 0.8700 level against the British Pound and recovered. The EUR/GBP pair is currently placed nicely above 0.8740 and is preparing for the next move. 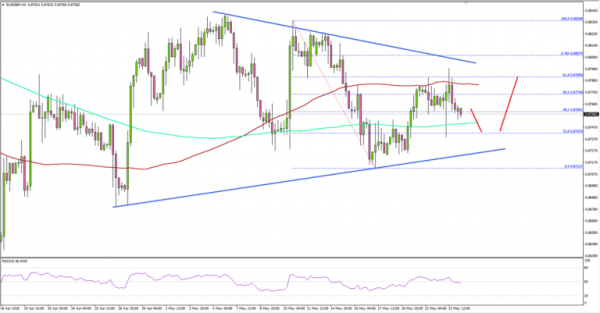 At the moment, it seems like the pair is well supported above the 0.8740 level and is forming a crucial contracting triangle with resistance at 0.8810 on the 4-hours chart.

Recently in the UK, the Consumer Price Index for April 2018 was released by the National Statistics. The market was looking for a rise of 0.5% in the CPI in April 2018 compared with the previous month.

The largest downward contribution to the change in the rate came from air fares, which were influenced by the timing of Easter. Rising prices for motor fuels produced the largest, partially offsetting, upward effect. The Consumer Prices Index (CPI) 12-month rate was 2.4% in April 2018, down from 2.5% in March 2018.

The overall result failed to help the British Pound and it seems like it may continue to decline in the near term.