The EURUSD reached 1.09 early Monday, its highest level since April last year. A strong uptrend has been in place for the past four months, during which time the pair has risen from lows just above 0.95 to the current level of 1.0915, or +14.5%. While the overall uptrend in the pair is probably a long-term story, signs of accumulated fatigue need to be recharged.

On the daily EURUSD chart, the Relative Strength Index has been flirting with the overbought territory since mid-November. However, shallow and short-lived (three days) corrections have erased local overbought conditions. Such corrections have given the market room to grow. 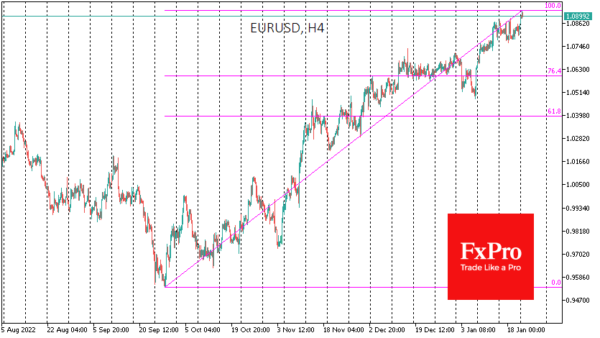 However, the market has now approached overbought conditions on the weekly chart. This often signals commodities and equity markets to prepare for a reversal. However, in the case of the EURUSD, touching the overbought/oversold area is just a strong enough signal for a correction in a couple of weeks, but not necessarily for a long-term reversal, so there is no point in looking too far ahead. 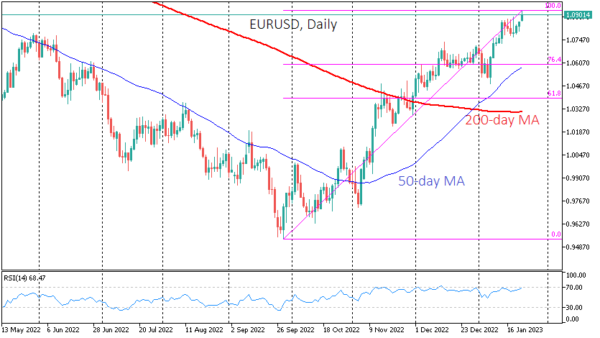 The market’s focus on better-than-expected Eurozone data was a significant driver for the pair. The chances of avoiding a recession have been boosted by the hawkish tone of ECB officials, who have signalled that they will raise interest rates in 50-point increments at the next two meetings. Consumer confidence is also expected to improve thanks to lower energy prices and signs of easing inflationary pressures.

However, in our view, markets have been too dismissive of the Fed’s signals that it is prepared for a prolonged fight against inflation rather than settling for a short-term victory. Fed officials have been saying for the past month that they are prepared to raise rates further than the market expects and will not cut in 2023. But the markets are still betting on rate cuts before the end of the year, according to futures market estimates.

We saw a similar divergence between market expectations and the Fed’s stance in June and August last year, leading to a fresh wave of equity sell-offs and a rise in the dollar. Something similar now is brewing.

The lower boundary of the range is the support line at 61.8% of this rally, and the upper edge is the 50-week moving average. Breaking this line has been an essential part of the pair’s long-term reversals in the history of the euro. And only a consolidation below it would call into question that the euro entered a long-term bull market in the last quarter of last year – when the news background was especially dramatic.