Although the greenback retreated initially last week, renewed buying interest did emerge at 111.99 (we recommended to buy at 112.10 and a long position was entered) and dollar has rallied from there since, adding credence to our bullish view that low has been formed at 110.84 last month and upside bias remains for this move to extend further gain to 113.91 resistance, however, a daily close above this level is needed to retain bullishness and confirm the fall from 114.74 has ended, bring further gain to 114.40-50 first.

On the downside, whilst pullback to 113.00-10 cannot be ruled out, reckon the Kijun-Sen (now at 112.79) would limit downside and bring another rise later. A daily close below the Tenkan-Sen (now at 112.53) would defer and risk another test of said support at 111.99, having said that, only a break below this level would abort and signal top is formed instead, bring further fall towards support at 111.41. Only a drop below this support would shift risk to downside and signal the rebound from 110.84 low has ended, bring retest of this level. In the unlikely event that dollar drops below 110.84, this would signal the fall from 114.74 top has resumed forweakness to 110.00, then 109.50-60 but price should stay above 109.00-10. 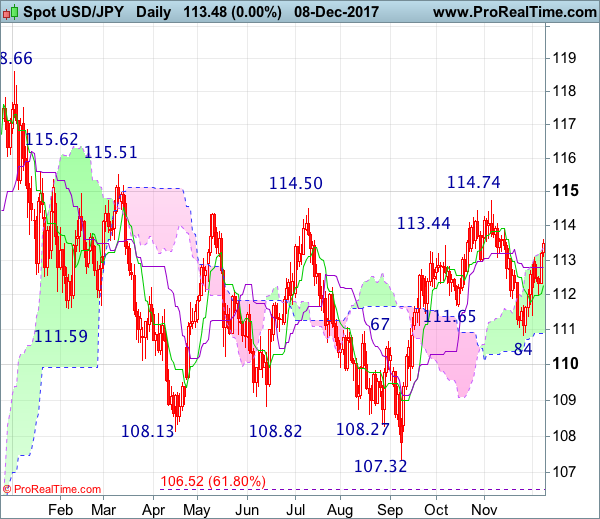 On the weekly chart, the greenback found renewed buying interest at 111.99 last week and has risen again, adding credence to our view that the pullback from 114.74 has ended, then further gain to 113.90-95 would be seen, break there would being a retest of said resistance. Once this resistance is penetrated, this would signal the rise from 107.32 low has resumed for headway to 115.51-62 resistance area, break there would add credence to our view that early erratic decline from 118.66 has ended at 107.32, then upmove to 116.50-60 and possibly 117.00-10 would follow.