After Tuesday’s recovery in the stock markets following Monday’s rout, I was wondering whether FX majors such as the EUR/USD as well as buck-denominated gold and silver would join the rebound, or whether the dollar’s negative relationship with stocks had broken down for good after establishing a strong negative correlation in the past few months.

Well, first thing this morning saw the major dollar pairs all come under further pressure against the greenback, even as European stock indices and US futures extended their recovery. We had some rather disappointing services PMIs out of the Eurozone, which underscored concerns over a faltering economic recovery and so traders sold the euro. But the soft data also raised the prospects of more stimulus, which is presumably why stocks rallied.

But by mid-morning, when this report was being written, the major pairs had all rebounded off their lows and some had turned positive on the day, even the EUR/USD. More on this pair later.
With both stocks rising and XXX/USD pairs rebounding, this could be an early indication that the existing trends of rising stocks and falling US dollar have resumed. We need confirmation, though, as similar spikes in the majors have faded recently. A solid daily close in the green for the FX majors and gold would be just that.

Meanwhile, the Eurozone’s flash manufacturing PMI beat expectations thanks to a sharper-than-expected recovery in Germany. France however registered only a modest increase in its manufacturing PMI.

Ahead of the US session, the EUR/USD has turned higher despite poor Eurozone data, but still remains lower on the week: 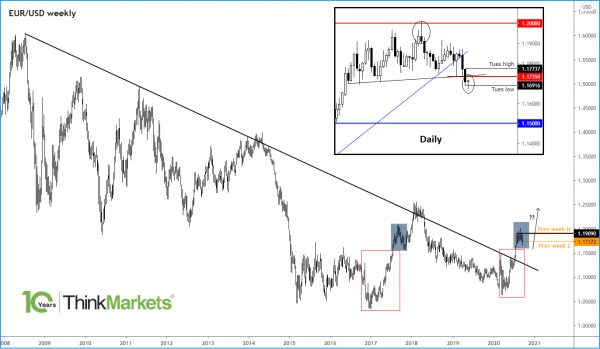 The above chart shows similarity in price action of the EUR/USD in 2020 with that of the 2017 rally. After a big breakout in 2017, the currency pair then went into a period of consolidation, as it has done so now. But in 2017 it then staged another breakout attempt. If this is anything to go by then the EUR/USD may resume its rally in the not-too-distant future, especially as it has clearly broken its long-term downtrend. I think if we go above Tuesday’s high now that will be the bullish trigger for me, as it would indicate that those who traded the head and shoulders will have been trapped. Just thinking outside the box here; a lot of bearishness on EUR/USD makes me think the pain trade is yet to come for the bears. Anyway, we will cross that bridge when we get there. For now, the short-term trend is bearish, but do watch out for a trap to form based on the above chart.

Coming up later in the day, we have flash PMIs from the world’s largest economy. Also from the US, Fed chair will be testifying on the economic impacts of COVID-19, and later we will have the latest oil inventories data to look forward to.

On this side of the pond, the UK’s manufacturing PMI was bang in line with exceptions while the services sector PMI missed the mark. Needless to say, the FTSE extended its rebound from the day before, along with the wider European indices. The index is now looking rather constructive after a two-day rebound: 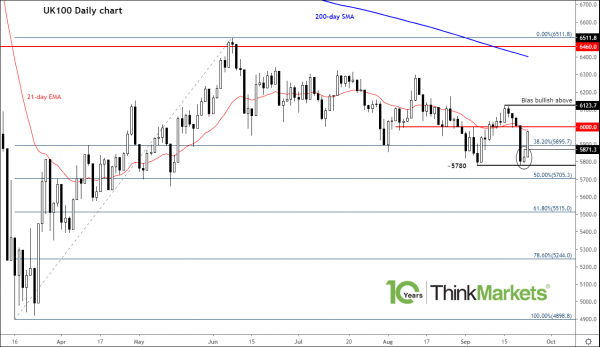 It still faces some resistance including around 6,000 and a higher high above 6124/5 is needed to confirm the potential reversal.