USD/CAD is slightly lower in Friday trade. In the North American session, the pair is trading at 1.3306, down 0.14% on the day.

Canada publishes GDP on a monthly basis, unlike other major economies, which release GDP each quarter. In August, the economy slowed to 1.2%, down significantly from 3.0% in July. Although the reading beat the forecast of 0.9%, investor appetite for the Canadian dollar could weaken, as economic growth slows and a second wave of Covid-19 has hit the country. On the inflation front, the Raw Materials Price Index was much weaker than expected. The September reading came in at -2.2%, well off the estimate of 0.3%. This was the first decline since April.

South of the border, inflation levels also remain at very low levels. The US Core PCE Price Index, which is believed to be one of the Federal Reserve’s preferred inflation indicators, came in at 0.2% in September. This was slightly lower from the August reading of 0.3 per cent, but matched the forecast.

US GDP sizzles but greenback shrugs

US Advance GDP soared in the third quarter, posting a massive gain of 33.1%, on an annualised basis. This reading was slightly stronger than expected, as the street had projected a reading of 32.0%. Investor reaction was muted, as the forecast was very close to the actual reading. Although the GDP gain marked the best quarter on record, there wasn’t much celebrating, as this follows  Q2 reading which was the worst quarter on record, at -31.4%. This means that despite a stellar leap in economic growth in the third quarter, the US economy has still not recovered to its pre-corona levels. 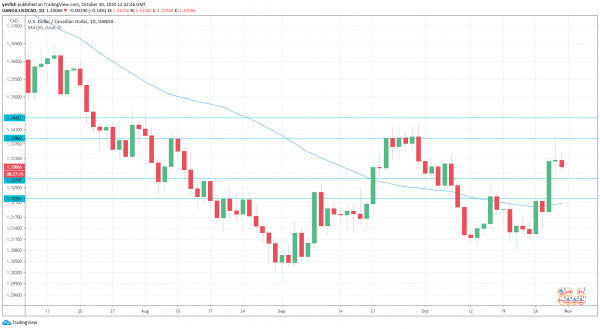