ECB’s conclusion of the strategy review on July 8 has made this week’s meeting very important. Policymakers adjusted the inflation target to a symmetric 2%, allowing a temporary overshoot. Despite the significant change, no monetary policy is expected to change in July. We only expect some changes in the forward guidance, in reflection of the new inflation target. We are not confident that the forward guidance would be huge, given the disagreement among members over the monetary policy outlook.

To the market’s surprise, the ECB published the conclusions of its strategy review on 8 July. The most crucial conclusion of the review is the change in the inflation target. The central bank judged that price stability is best maintained by aiming for “2% inflation over the medium term. The Governing Council’s commitment to this target is symmetric”, meaning that “the Governing Council considers negative and positive deviations from this target as equally undesirable”. This marks a shift from the ambiguous “below, but close to 2%” target previously. The central bank also nodded to a temporary overshoot of inflation. As noted in the statement, the new inflation target “may also imply a transitory period in which inflation is moderately above target”. This signals that policy easing should continue for some time.

While we do not expect any monetary policy to change at the upcoming meeting – changes should be made in September, alongside updates in economic projections, a change in forward guidance would be needed at least. Currently, the forward guidance suggests that policy rates are expected to “remain at their present or lower levels until we have seen the inflation outlook robustly converge to a level sufficiently close to, but below, 2% within our projection horizon, and such convergence has been consistently reflected in underlying inflation dynamics”. At minimum, it would have to be changed to “… close to 2%…”, reflecting the new inflation target. 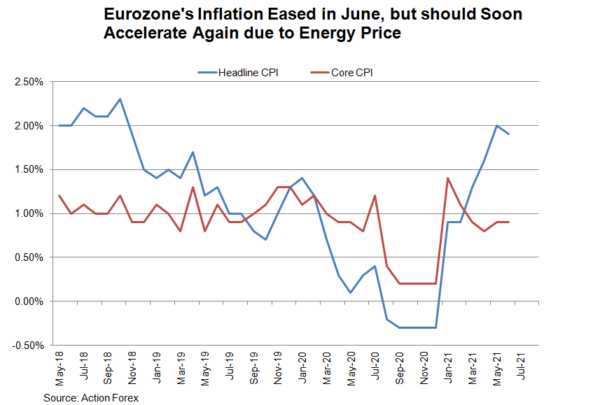 The guidance on PEPP and APP programs will remain intact. That is, the PEPP will last until the end of March 2022 or “until the Governing Council judges that the coronavirus crisis phase is over”. The purchase ceiling would remain 1.85 trillion euro but the central bank might water down the possibility that it would not be used in full, given the resurgence of coronavirus cases in a number of European countries. The APP will continue to run until “shortly before” the first rate hike.

We expect changes to the forward guidance to be mild as the members remained divided over the outlook of the asset purchases programs. As revealed in the June minutes, there was “a broad consensus” in favour of maintaining the current level of purchases delivered by the PEPP. Yet, some hawks insisted in scaling back some of the stimuli. Given the current inflation level, the conclusion of the strategic review has indicated a dovish bias to ECB’s monetary policy outlook. However, a split Governing Council suggests that any change in the monetary policy could hardly come without intense debate. 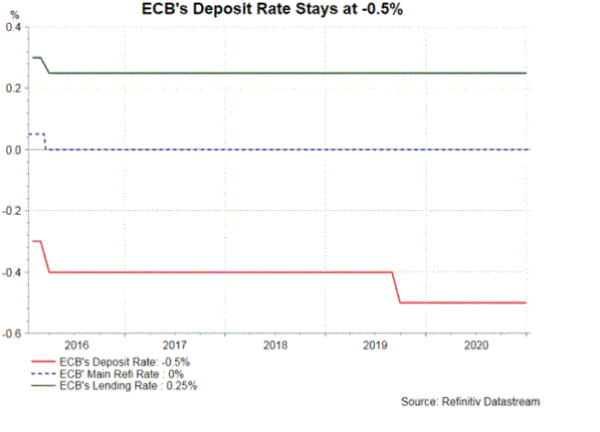 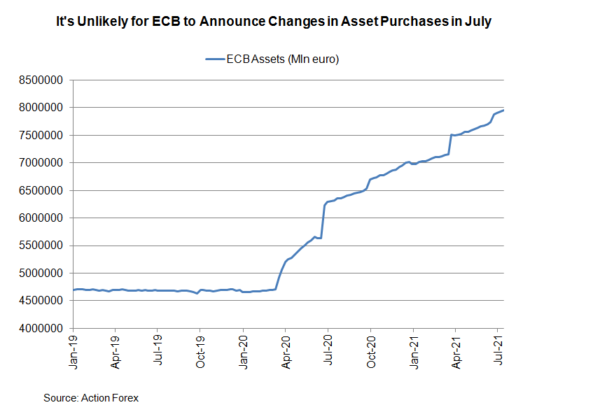