BOJ again voted 8-1 to leave the monetary policies unchanged in October. The targets for short- and long-term interest rates stay at -0.1% and around 0%, respectively while the guideline for JGB purchases remains at an annual pace of about 80 trillion yen. Again, BOJ revised lower its inflation forecasts for FY 2017 and FY 2018 but maintained that for FY 2019. The central bank upgraded the GDP growth outlook for FY 2017 while leaving others unadjusted. The new member was the lone dissent as he voted against the yield curve control measure for two meetings in a row. He judged that ‘monetary easing effects gained from the current yield curve were not enough for 2% inflation to be achieved around fiscal 2019’. At the press conference, Governor Kuroda defended the yield curve control policy and the +2% target. As he suggested, the ‘main objective is to achieve 2% inflation and stably maintain price growth at that level. There’s no change to our view that monetary policy must be guided to achieve this objective’ and there is no need to change the yield targets’.

Since the Fed has started balance sheet reduction this month and the ECB announced last week to reduced asset purchases in 2018, Kuroda has encountered this question at the press conference. Unsurprisingly, he immediately shrugged off any intention to taper anytime soon. At he noted, ‘it would be misleading for markets for the BOJ to debate an exit strategy now’. He added that ‘it’s wrong to assume an exit from monetary easing would be difficult just because central banks are embarking on non-conventional monetary policies. Even under conventional monetary policies, central banks can face difficulty exiting if monetary easing or tightening steps are excessive’.

Interestingly, we notice that the monetary base has been shrinking. The chart below shows that the central bank has steadily diminished its monthly JGBs purchase in the first nine months of this year. The annual increase in JGB buying has fallen to 60-ishh trillion yen in September, from about 79 trillion yen in December 2016. This might be evidence that the central bank has gradually move away from targeting monetary base growth, to yield curve control, as a policy instrument. If so, the sustainability of yield curve control should be closely watched.

Regarding the next governor, Kuroda indicated that it is important for him/her to ‘have the ability to grasp what is happening in the real economy and the ability to theoretically analyze the impact of policy moves. He or she also needs to have a global human network’. Following Abe’s victory in the snap election earlier this month, it is likely that he would reappoint Kuroda for another term. Yet, no matter the next governor is Kuroda or not, we expect the person would have to continue dovish stance under Abe’s regime. 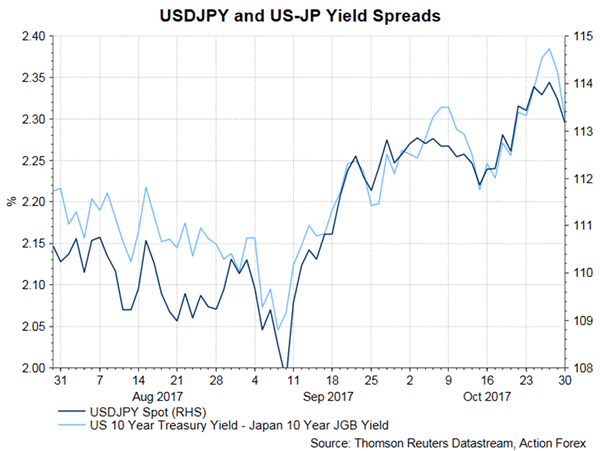