New Zealand Dollar weakens after RBNZ left the Official Cash Rate (OCR) unchanged at 1.75%. More importantly, the central bank adopted a more dovish outlook for the OCR. RBNZ now forecast interest rate to stay at around 1.8% through June 2019 and move up to 2.0% in 2020. The markets were nearly pricing in full chance of a rate hike by November this year. But after the release, such pricing dropped to around 50%. Meanwhile, RBNZ trimmed inflation forecast too. Inflation is projected to be at 1.5% this year, soften to 1.3% at the start of 2018 and then climb back to 2% by mid-2019. Technically, NZD/USD dips through 0.7240 support which now indicates near term reversal. Near term outlook in NZD/USD is now turned bearish for 55 day EMA (now at 0.7150). 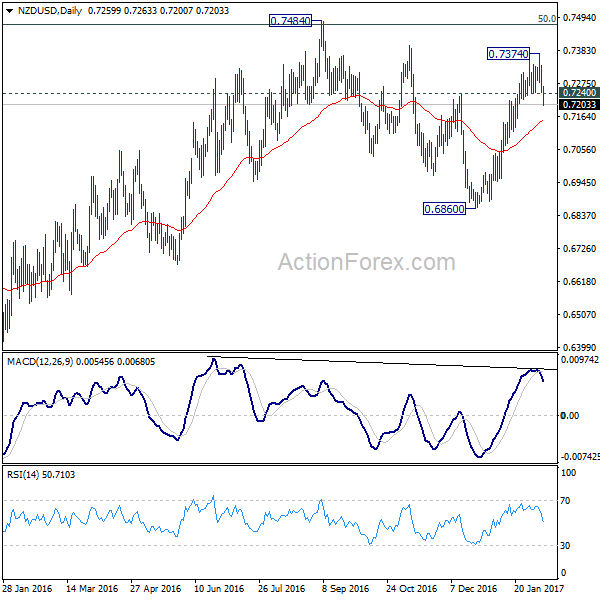 From Australia, NAB business confidence dropped slightly to 5 in Q4, down from 6. Current condition index dropped 2 points to 5. Capital expenditure plans dropped to 22, down from 24. NAB noted that "relative stability of business confidence gives us some comfort". However, "some of the trends could suggest a loss of momentum in the longer term, should they continue." Also, there is "little to no sign that inflation or wage pressures are picking up materially."

In UK, a BoE survey showed that businesses are prepared to offer less pay rise this year. Companies expected to offer 2.2% increase in wages, slowed from 2.7% in 2016. That is a reaction to rising costs due to Sterling’s depreciation since last year’s Brexit referendum. BoE also noted that "consumer spending growth had remained resilient, but was expected to ease during the year as prices rose." Wage growth would be a key factor for BoE to determine when to lift interest rate while policies are still tolerant for a spike in headline inflation in near term.

AUD/USD is staying in tight range below 0.7695 and intraday bias stays neutral. Lost up momentum is seen in bearish divergence condition in 4 hours MACD. While another rise cannot be ruled out, we’d expect strong resistance from 0.7777/7833 resistance zone to limit upside and bring near term reversal. On the downside, break of 0.7510 minor support will indicate that rise from 0.7158 has completed already and turn bias back to the downside for this key near term support level. 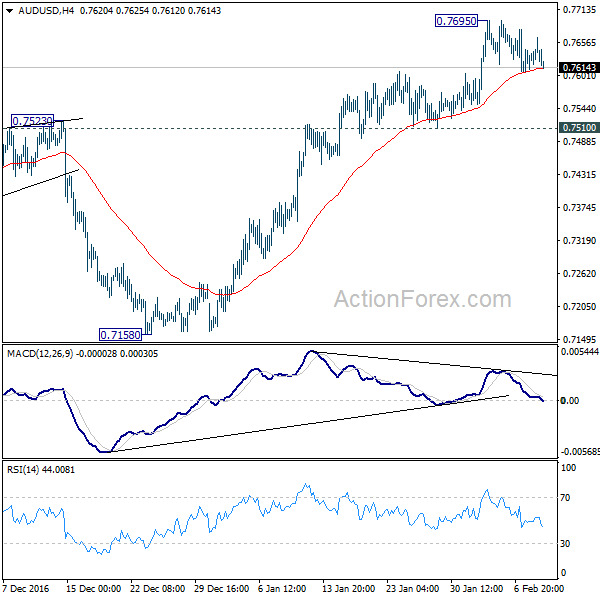 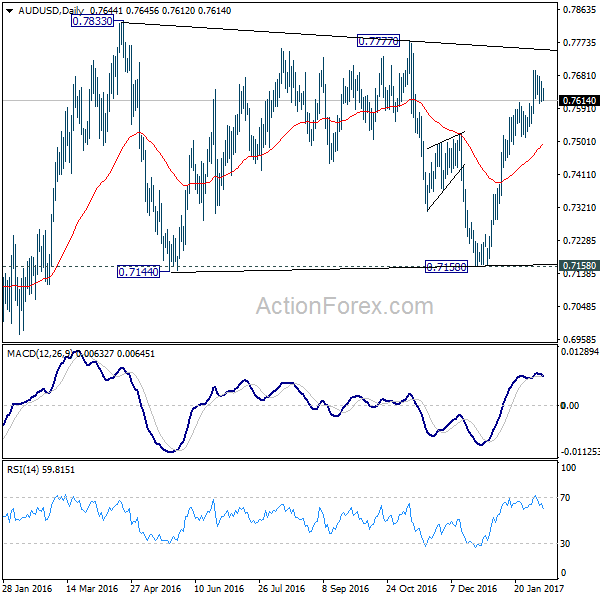