Markets are stabilizing from yesterday’s sharp volatility. Major European indices are trading in tight range with DAX and CAC holding mild gains at the time of writing. US indices also open nearly flat and are bounded in tight range. In the currency markets, Dollar recovers broadly today but is staying deep in red against European majors for the week. Commodity currencies remain broadly weak too. Sterling remains the strongest major currency this week even though it’s paring some gains against Dollar and other Europeans. In other markets, Gold is trading lower by at it continues to struggle to find buying to push through 1300 handle. WTI crude oil is also staying in consolidation.

President of European Commission Jean-Claude Juncker had some "real talks" with UK Prime Minister Theresa May after the latter announced to call for a snap election in June. And Juncker’s spokesman Margaritis Schinas said that Juncker considers that "the real political negotiations on article 50 with the United Kingdom will start after the elections foreseen for the 8th of June." Meanwhile, the EC sees UK election as a "domestic issue" and "will not intervene". European Council President Donald Tusk’s spokesman said that "the UK elections do not change our EU27 plans." And, "we expect to have the Brexit guidelines adopted by the European Council on 29 April and following that the Brexit negotiating directives ready on 22 May. This will allow the EU27 to start negotiations."

May surprised the world by making a U-turn to announce that she will seek parliamentary approval to bring forward the election scheduled for May 2020 to June 8 this year. She explained that "because Brexit isn’t just about the letter that says we want to leave, it’s about negotiating the deal, about getting the right deal from Europe." And, "the public want us to deliver on leaving the European Union and they want us to build that stronger Britain for the future beyond leaving the European Union." It’s generally expected that May will get over two-third of support from the parliament for the snap election.

In a paper titled Necessity as the mother of invention: monetary policy after the crisis, ECB noted that central banks in the world will have "broader mandates" in the future. Also, central banks will use "macro-prudential tools more widely" and communicate more than before the global financial crisis. The expected noted that most unconventional tools will remain in "central banks’ toolkits. And that’s "in particular because central bank governors who gain experience with a particular tool are considerably more likely to assess that tool positively" Separately, ECB governing council member, and Estonian central bank head Ardo Hansson said that the central bank will need more economic data before starting to consider change in its monetary policies.

In France, centrist Emmanuel Macron remains the favorite to win the presidential election. According to a poll of 11601 people for Le Monde newspaper, Macron and far-right Marine Le Pen will come out of the first round of the election this Sunday as the leader. Support for Le Pen for the first round dropped 2.5% to 22.5%. Support for Macron for the first round. dropped 2% to 23.0. While there would be surprises, there should be enough safety margin, comparing to support for far-left Jean-Luc Melenchon (19.0%) and conservative Francois Fillon (19.5%).

In the bigger picture, price actions from 125.85 high are seen as a corrective pattern. Current development suggests that it’s not completed yet and is extending. In case of deeper decline, downside should be contained by 61.8% retracement of 75.56 to 125.85 at 94.77 to bring rebound. Rise from 75.56 is still expected to resume later after the correction from 125.85 completes. 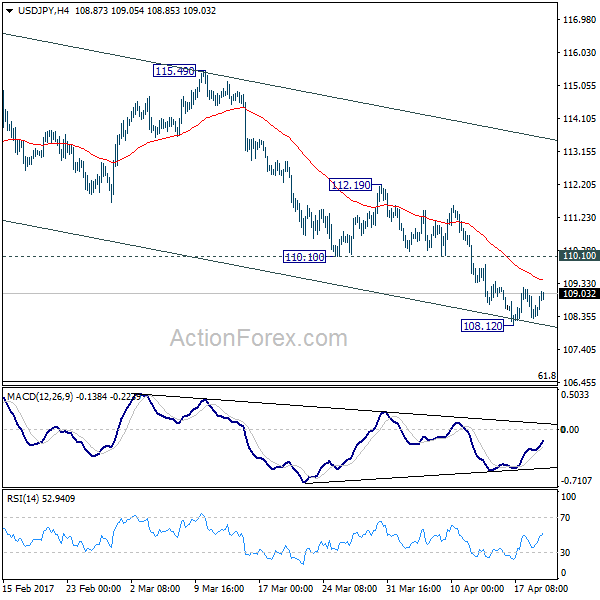 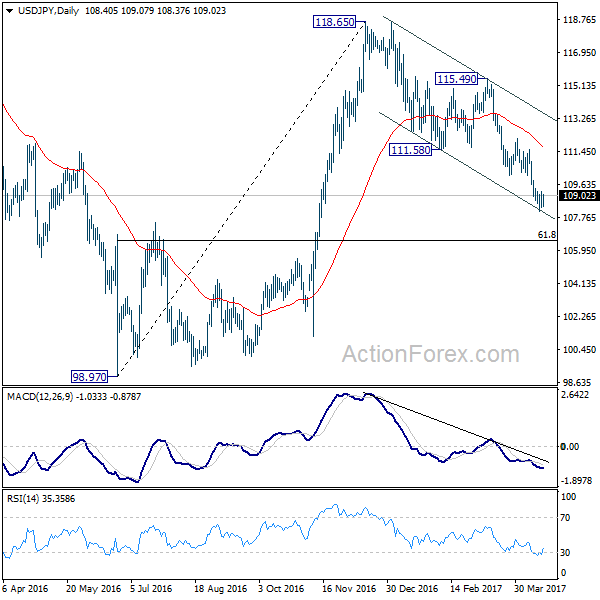