Canadian dollar are lifted by solid job data and strength in oil prices today. The Canadian job market expanded by 48.3k in January, much better than expectation of 0.0k. Unemployment rate also dropped 0.1% to 6.8%. Meanwhile WTI crude oil is gaining 1.7% at the time of writing and is pressing 54 handle. It’s possible that WTI is heading to retest recent resistance at 55.24 based on current momentum. On the other hand, the greenback is also strong, except versus Aussie and Loonie. Trump trades as back in force and Donald Trump said he will deliver a "phenomenal" tax overhaul within two or three weeks. From US, import price index rose 0.4% in January.

ECB Mersch Urged to Take Rate Cuts off the Table

ECB executive board member Yves Mersch said the central bank should take rate cuts off the table as the economy has been strong with inflation heading back to "comfort zone". And he urged to change the communication that "even lower rates" would be considered as a move, to maintain the central bank’s credibility. Nonetheless, Mersch is in no support for ending the quantitative easing program. He said that "while the economic outlook for the euro area is steadily brightening, dark clouds are building up on the political horizon beyond the continent."

RBA Governor Philip Lowe suggested that "it’s hard to say that the exchange rate is fundamentally too high". Moreover, "if the global outlooks were to change and the exchange rate/interest rate combination led to growth being downgraded, then you could make the case that the exchange rate was too high". He admitted that it is difficult to say "the configuration is leading to growth outcomes that aren’t satisfactory". He forecast the economy to grow by around 3% over 2017 and 2018 while inflation will increase modestly.

EUR/USD’s breach of 1.0619 minor support finally suggests that the corrective rise from 1.0339 is completed at 1.0828. Intraday bias is back on the downside for retesting 1.0339 low first. Decisive break there will confirm resumption of medium term down trend. On the upside, however, above 1.0713 minor resistance will delay the bearish case and turn bias neutral first. 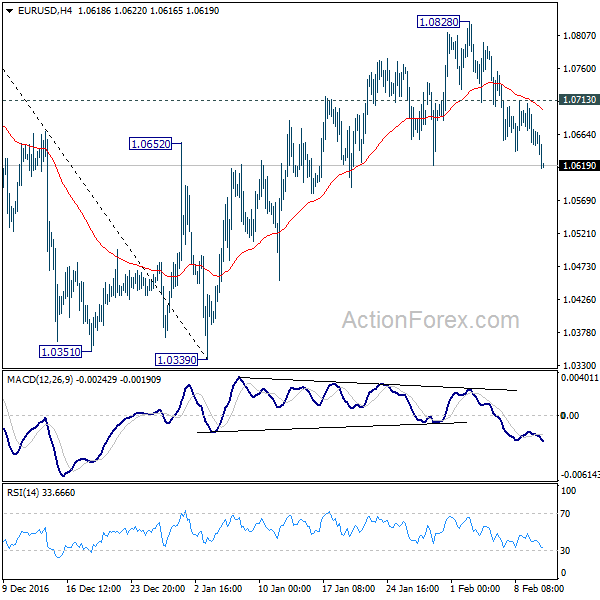 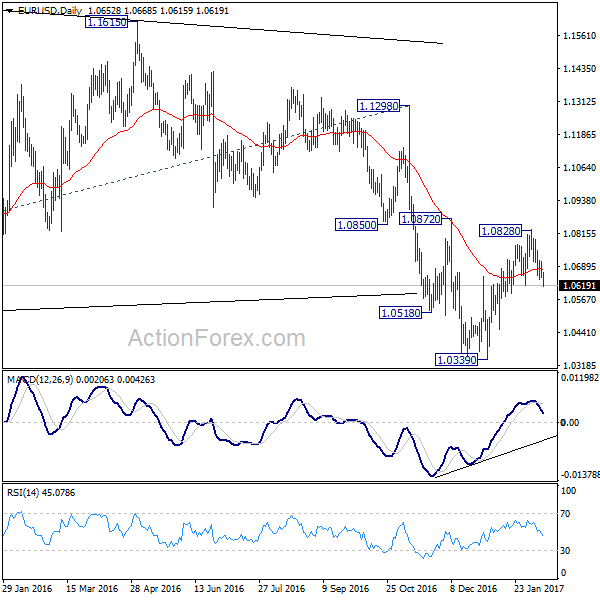