Yen and Swiss Franc are so far the strongest ones for this holiday week. But trading is rather subdued in Asia, as part of the region are still on holiday. Activity will likely remain low in European session with Germany, UK and Swiss on holiday today. The markets might come back to life again later in the US session though. For the month, it’s obvious that Yen and Swiss Franc are the strongest ones on risk aversion, globally. Euro is the third strongest as somewhat helped by resolution in Italy budget. Australian Dollar led other commodity currencies lower. Dollar has been mixed despite all the US political headlines.

Trump continued his criticism on Fed this week. He said “They’re raising interest rates too fast because they think the economy is so good. But I think that they will get it pretty soon.” Earlier, he also said “the only problem our economy has is the Fed.”

On government shutdown, Trump warned that “it’s not going to reopen until we have a wall, a fence, whatever they’d like to call it. I’ll call it whatever they want, but it’s all the same thing. It’s a barrier from people pouring into the country, from drugs.”

In the minutes of October 30/31 BoJ meeting, there consensus that the global economies continued to grow “firmly on the whole” However, there had been “increasing disparities of growth” among countries and regions. Some members urged to pay attention to slowing pace of improvement in business sentiments, as seen in PMIs in “declining trend”. One member noted due to trade friction and rising US interest rates, overseas economies were “beginning to level off”.

On Japan’s price developments, members believed that the “continued relatively weak developments in prices compared to the economic expansion and the labor market tightening largely had been affected by the deeply entrenched mindset and behavior”. But year-on-year change in CPI was “likely to increase gradually toward 2 percent, mainly on the back of the output gap remaining positive and medium- to long-term inflation expectations rising. ”

On risks to baseline scenario of economic activity and prices, the minutes pointed to four upside and downside risk factor : (1) developments in overseas economies; (2) the effects of the scheduled consumption tax hike; (3) firms’ and households’ medium- to long-term growth expectations; and (4) fiscal sustainability in the medium to long term. On specific risks to prices, members pointed to the following three factors: (1) developments in medium- to long-term inflation expectations; (2) the responsiveness of prices to the output gap; and (3) developments in foreign exchange rates and international commodity prices.

US S&P Case-Shiller house price and Richmond Fed manufacturing index are the only features today.

USD/JPY dropped to as low as 110.13 so far and there is no sign of bottoming yet. The break of 38.2% retracement of 104.62 to 114.54 at 110.75 and current downside acceleration now increases the chance of bearish reversal. Intraday bias is stays on the downside for 109.76 support next. Break will target 61.8% retracement at 108.40. On the upside, break of 111.46 resistance is needed to indicate short term bottoming. Otherwise, outlook will stay bearish even in case of recovery. 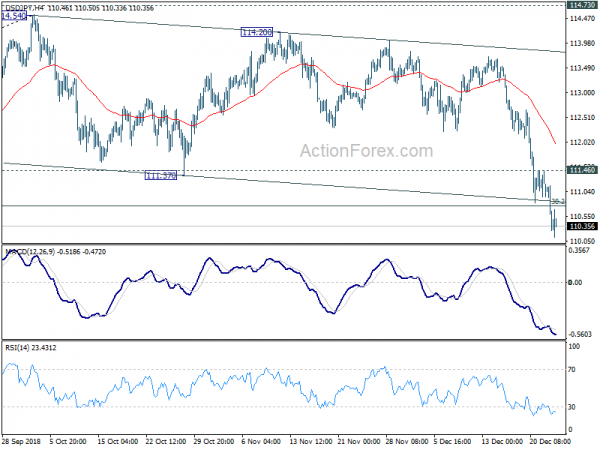 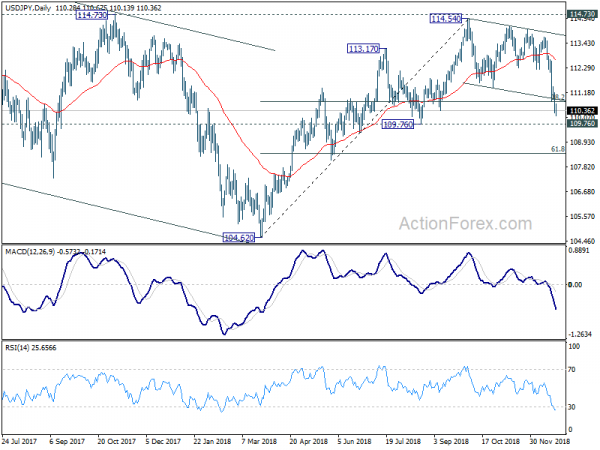