Dollar continues to trade mixed in early US session. The greenback is seen weaker against European majors and Yen. Nonetheless, Dollar trades mildly up against Canadian Dollar thanks to pull back in oil price. Released from US, Q4 GDP growth was unrevised at 1.9% annualized in Q4, below expectation of 2.1%. GDP price index was revised lower to 2.1%. Trade deficit widened to USD -69.2b in January. Wholesale inventories dropped -0.1% in January. From Canada, IPPI rose 0.4% mom in January while RMPI rose 1.9% mom. Focus will turn to US president Donald Trump’s address to Congress.

In his speech at the National Governors Association meeting on Monday, Trump told the state governors that he would delegate them "the powers that have been taken away from states and great people and great governors" so that the states "can control it better than the federal government". Trump also previewed the economic policies that would help the states. These include infrastructure spending, tax cuts, and fairer trade policies. He also indicated to talk about healthcare issue in the joint session address.

BoE deputy governor designate Charlotte Hogg warned that "households are beginning to face a squeeze on their incomes.:" She pointed to MPC forecast that "assumes steadily slowing growth in consumption, facilitated by a continued fall in the savings rate". And she envisaged "scenarios in which the reaction of consumption could be more sudden." Regarding inflation, she noted that her "tolerance for temporarily above-target inflation will depend on events." And she emphasized that "I would have no tolerance for a less than credible path back to target — from either above or below the target."

The British Chambers of Commerce published a report based on feedback from more than 400 businesses. It urged the government to give "solutions and certainty" to business before Brexit. BCC director general Adam Marshall said that "business communities across the UK want practical considerations, not ideology or politics, at the heart of the Government’s approach to Brexit negotiations". Meanwhile, the report also urged the government to "aim to minimise tariffs, seek to avoid costly non-tariff barriers, grandfather existing EU free trade agreements with third countries, and expand the trade mission programme".

The Swiss KOF leading indicator jumped sharply to 107.2 in February, up from 102.0 and beat expectation of 102.1. That’s also the highest level since 2013. KOF noted that "the Swiss franc appreciation shock from early 2015 hence by now appears to have been largely overcome." And Swiss economy should growth at "rates above average. It also said in the release that "the strongest positive contributions to this result come from the manufacturing industry, followed with a clear gap by the hospitality industry." And, "the markedly improved sentiment in manufacturing as a whole is primarily a reflection of the more positive assessment of incoming orders, followed by the production and employment outlook as well as by the profit situation."

USD/CHF continues to stays in consolidative trading below 1.0140. Intraday bias remains neutral at this point. With 0.9966 support intact, further rise is in favor. Above 1.0140 will turn bias to the upside and target a test on 1.0342 resistance. Based on neutral medium term outlook, we’d be cautious on topping at around 1.0342. Meanwhile, break of 0.9966 will indicate completion of the rebound from 0.9860. And intraday bias will be turned back to the downside for 0.9860. 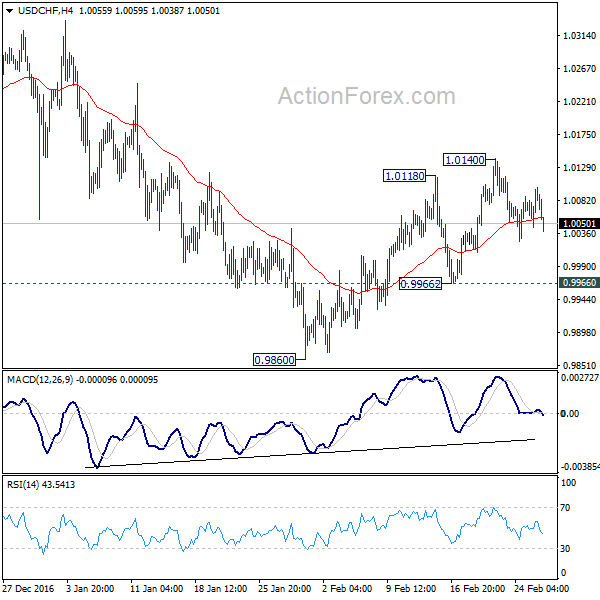 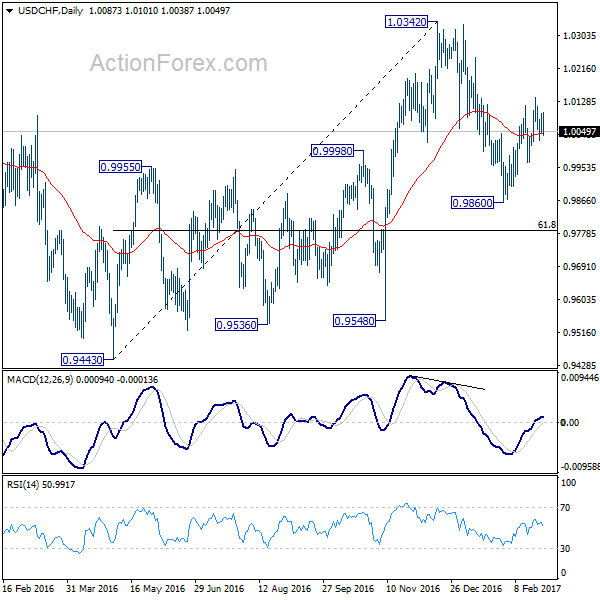