In this final tutorial in the series of trading the flag patterns, we take a closer look into the main elements that comprise the flag pattern and also how traders can make use of these elements in order to not only enter trades based on the flag pattern formations but also be able to manage their trades better. So far, we have learned that flag patterns can be a great way to trade, especially around a news release as it shows a perfect confluence of both fundamentals and technical analysis. Flag patterns basically come under the break out trading strategies, where trades are taken when price breaks out of a consolidation phase. The added advantage of trading with the flag patterns comes from the fact that they are often continuation pattern of the previous momentum, be it bullish or bearish. Therefore, flag patterns offer a higher level of reliability than trading traditional horizontal break outs.

Elements of a Flag Pattern

The flag pattern comprises of nothing more than support and resistance levels that are formed. The chart below gives the key levels in a flag pattern. 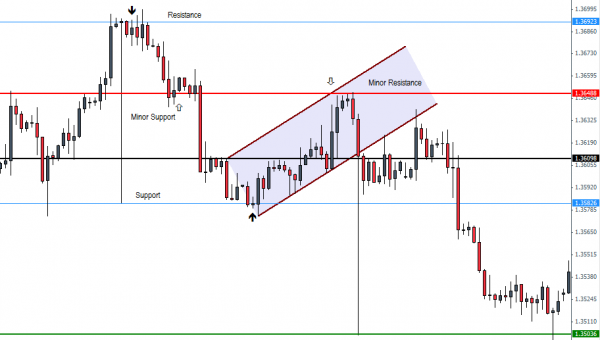 The main elements of the chart pattern can therefore be as follows:

The importance of the support/resistance levels in the flag

The chart below shows an example of a failed flag pattern that invalidated the set up merely based on how price reacted to the major support or resistance levels.

Here, we can notice that while initially price broke out from the bullish flag meeting most of the criteria, price failed to break above the major resistance level. For the astute trader, the reversal near this major resistance level provides early clues that the flag pattern could potentially fail. Thus, instead of continuing to keep the trade open, traders could either move their trades to break even or even look to locking some profits in anticipation of an invalidation of the flag pattern. 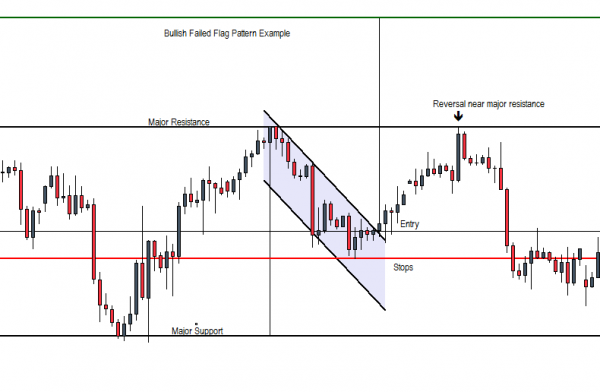 Another way to ensure that you are trading on the right side of the trend is to take into consideration the major prevailing trend and only trade flag patterns that validate the major trend. For example, if the overall trend is up, look to trading only the bullish flag and if the trend is down, look to trading the bearish flag patterns in order to minimize the rate of failure.

As we can see in this article as well as the previous two articles, flag patterns can be a good and simple way to trade with the trend while at the same time taking advantage of break outs. While flags usually offer a low risk high reward trade set ups, combining the elements of the flag patterns as well as looking to the candlestick patterns can help traders to greatly improve their win rates at the same time be able to manage their trades as well.

USDCAD Fails To Gain Optimism For Bullish Bias In Short-Term