Dollar strengthens broadly as markets took US president Donald Trump’s address to Congress positively. Dollar index is back at 101.60, comparing to yesterday’s low at 100.78 and is having key near term resistance at 101.79 in sight. Strength in greenback is most notable against Canadian Dollar, which was dragged down by oil price yesterday. On the other hand, the Japanese Yen is sold off broadly today on return to risk appetite. Asian indices are generally higher with Nikkei gaining nearly 1.5% at the time of writing. Focus will now turn to economic data from you, including personal income and spending, and ISM manufacturing, to solidify the strength in Dollar’s rebound.

No extreme comments from Trump

While Trump’s State of the Union address sent little details to the markets, the positive tone was taken well by traders. And possibly more importantly, there were no extreme comments that unnerved traders. On tax reform, Trump noted that his team "is developing historic tax reform that will reduce the tax rate on our companies so they can compete and thrive anywhere and with anyone" and would also "provide massive tax relief for the middle class". He did not specify the controversial border adjustment tax in his speech.

Trump criticized Obamacare, suggesting that "mandating every American to buy government-approved health insurance was never the right solution for America". His administration is planning to "lower the cost of health insurance" instead. Trump also reiterated the proposed infrastructural spending worth of as much as USD 1T. According to the Trump, "to launch our national rebuilding, I will be asking the Congress to approve legislation that produces a USD 1T investment in the infrastructure of the United States, financed through both public and private capital, creating millions of new jobs".

On the markets, the speculation for a March Fed hike is getting heat up again. San Francisco Fed president John Williams said he expected a rate hike to get "serious consideration" during the March 14-15 meeting in Washington. And he also noted that there was no need to delay the move. New York Fed president William Dudley said that the case for rate hike "has become a lot more compelling" with recent economic data. According to Bloomberg’s rate tool, markets are pricing in more than 70% chance of a hike this month, doubling last week’s pricing.

In Japan, BoJ lowered the purchase of short-maturity debt, one to three years" to JPY 320b, down from JPY 400b in its previous operation on February. Purchases of three to five year debts were also lowered to JPY 400b, down from JPY 420b. Analysts saw that as a move to fine tune the yield curve control. Meanwhile, BoJ governor Haruhiko asked investors not to read too much into daily operations. BoJ board member Takehiro Sato urged the central bank to be flexible in the yield targets. He noted that "it is appropriate to flexibly adjust" the BOJ’s yield curve targets if market long-term interest rates rise reflecting improvements in the economy and price outlook.

BoC and PMIs to highlight the day

USD/CAD’s strong rally and break of 1.3211 resistance indicates resumption of rebound from 1.2968. Also, it should confirm completion of pull back from 1.3598. Intraday bias is now back on the upside for 1.3598 first. Break will extend the larger rally from 1.2460 towards next fibonacci level at 1.3838. On the downside, though, below 1.3164 minor support will turn bias back to the downside for 1.2968 support instead. 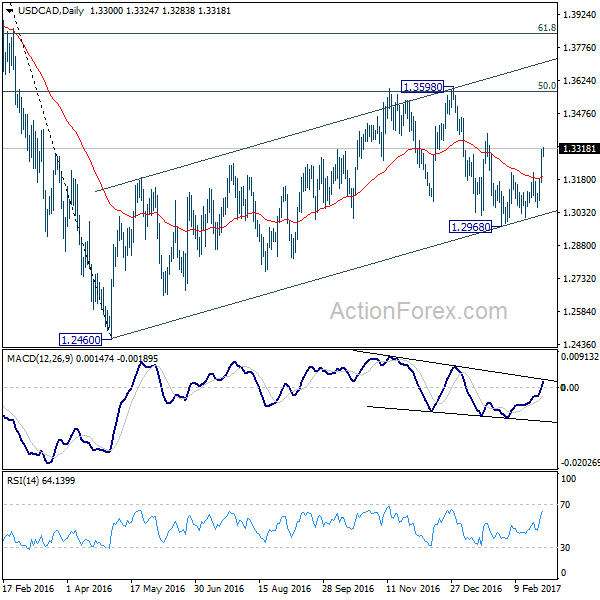