Dollar ended as the strongest one last week as boosted by solid economic data from the US. While markets are still pricing in full chance of a Fed rate cut this week, strong data argue against the chance of further easing after that. Euro and Canadian Dollar were the next strongest. ECB’s meeting and press conference came out less dovish than expected. While ECB did open the door for more rate cut, President Mario Draghi’s press conference suggested that he’s not in dead urgency to deliver easing.

On the other hand, New Zealand and Australian Dollar were the weakest one for the week. There were increasing expectation for more RBA rate as momentum in the Australian job market could slow, which would limit upward path in inflation. Sterling ended mixed after suffering late selling. It’s now Boris Johnson’s era as UK Prime Minister and we’ll see how he’s going to deliver Brexit on October 31 as promised.

There was basically no change in the expectations for Fed’s rate cut on July 31 this week, despite some solid economic data from the US. June PCE inflation and July consumer confidence will be the only pieces on data before FOMC meeting. Core PCE might pick up to 1.7% yoy, in accordance with core CPI. But it will unlikely alter policymakers’ minds. ISM manufacturing and non-farm payroll reports are important, but they’ll come after Fed’s decision.

For now, fed fund futures are still pricing in 78.6% chance of a 25bps cut, and 21.4% chance of 50bps cut. We’d admit that it’s unlikely for Fed to upset such expectations. But still, we’d view the FOMC meeting as live. Firstly, there is no guarantee that over half of voters would give in to market “bullying”. Secondly, and more importantly, Fed would have many different ways to “communicate” the rate cut, even if it’s delivered. That is, this could be a “neutral” cut where Fed would signal a long pause afterwards. Dollar could be lifted quite notably in such case.

US stocks surged to new record highs last week, with support from Fed expectation while economic data continued to be strong. S&P 500’s rise from 2728.81 is in progress and would likely extend this week. However, it’s now close to two important projection levels, with diminishing upside momentum as seen in daily MACD. The closer level is a long term one, 61.8% projection of 1810.10 to 2940.91 from 2346.58 at 3045.42. We’re expecting strong resistance in this zone to limit upside at initial attempt.

Dollar index’s rebound from 95.84 extended higher to close at 98.01 last week. For now, we’re still seeing the index as in consolidation from 98.37 high. Thus, in next rise, we don’t envisage a firm break of 98.37 yet. That corresponds to 1.1107 low in EUR/USD. Break of 96.75 support will bring another falling leg inside the consolidation pattern and target 95.84 and below. However, sustained break of 98.37, together with firm break of 1.1107 in EUR/USD, will confirm up trend resumption.

AUD/USD’s sharp decline and break of 0.6910 support last week suggests that rebound from 0.6831 has completed at 0.7082 already. The three wave corrective structure suggests that larger decline from 0.7295 is in progress and is possibly resuming. Initial bias stays on the downside this week for 0.6831 support first. Break will confirm and target 0.6722 low next. On the upside, break of 0.6955 minor resistance will turn intraday bias neutral again. 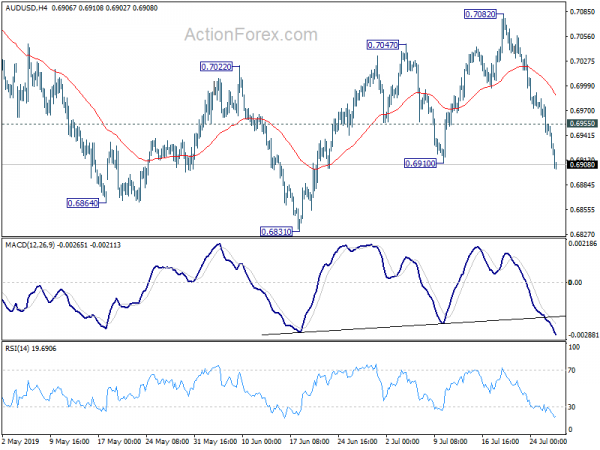 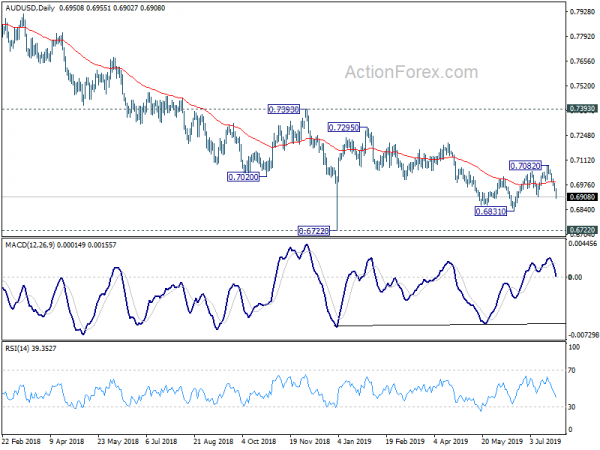 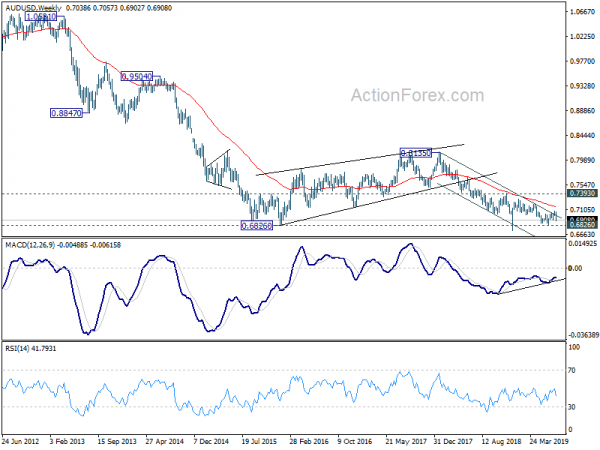 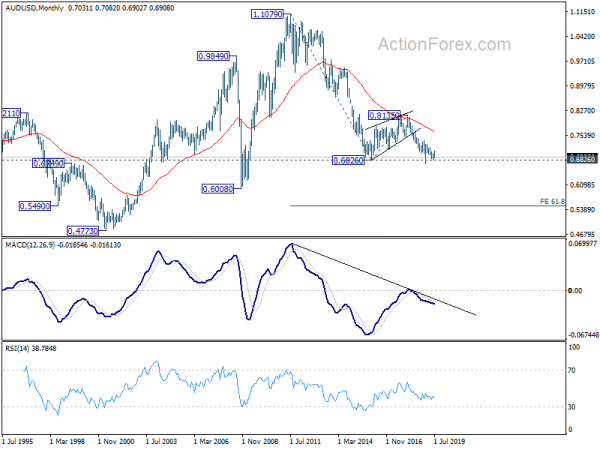