Dollar strengthens further in early US session after strong employment data. Initial jobless claims dropped -19k to 223k in the week ended February 25, below expectation of 245k. More importantly, that is the lowest level since March 1973 and indicates persistent healthiness in the job market. The four-week moving average dropped to 234.25k, down from 240.50k, hitting lowest since April 1973. Continuing claims rose 2k to 2.07m in the week ended February 18. The greenback is boosted by increasing speculations of a rate hike by Fed this month. Technically, the greenback took out near term resistance level against Sterling and Canadian Dollar earlier this week. While it’s still limited below corresponding resistance against Euro and Yen, AUD/USD is following and broke a near term support level today.

Eurozone CPI accelerated to 2.0% yoy in February, above expectation of 1.9% yoy, and met ECB’s target. Core CPI, nonetheless, was unchanged at 0.9% yoy. Euro receives little support from the data and remains weak against the greenback. Some analysts point to the fact that core inflation remains weak and stable at best. And, there is no reason for ECB to change its ultra-loose monetary policies. In addition, Eurozone will be facing a number of political risks this year, including elections in France, the Netherlands and Germany, as well as Brexit. Also from Eurozone, PPI rose 0.7% mom, 3.5% yoy in January, unemployment rate was unchanged at 9.6%. German import price rose 0.9% mom in January.

Sterling, on the other hand, strengthens mildly against Euro too. UK construction PMI rose to 52.5 in February, above expectation of 52.0. Markit noted that "February’s survey data highlights that the UK construction sector has rebounded from its postreferendum soft patch but remains on a relatively slow growth trajectory." However, "weaker momentum in the house building sector was a key factor weighing on construction growth, alongside a renewed fall in work commercial projects." Also from Europe, Swiss GDP rose 0.1% qoq in Q4, below expectation of 0.4% qoq. Swiss retail sales dropped -1.4% yoy in January.

Australia trade surplus narrowed to AUD 1.3b in January, much smaller than expectation of AUD 3.8b. Exports dropped -3%, AUD 31.8b, led by sharp decline in non-monetary gold and non-rural exports. Imports, however, jumped 4% to 30.5b, with a surge in consumption, intermediate and other merchandise and capital goods. The report is seen as mixed by economists, as the pickup in consumer goods is positive. Also from Australia, building approvals rose 1.8% mom. Japan monetary base rose 21.4% yoy in February. 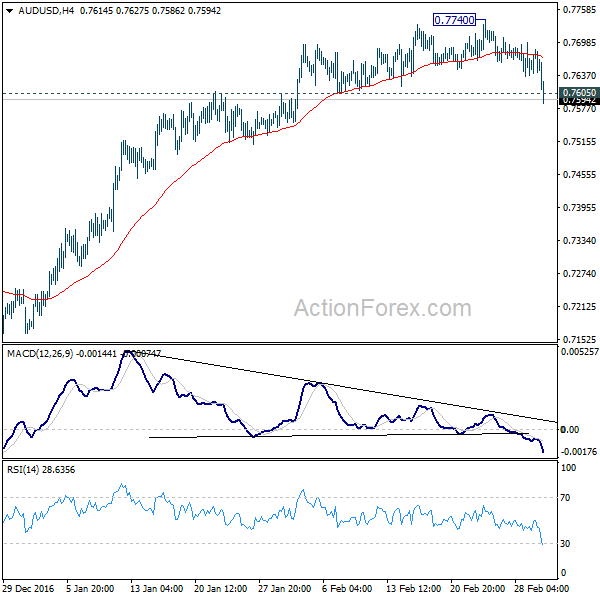 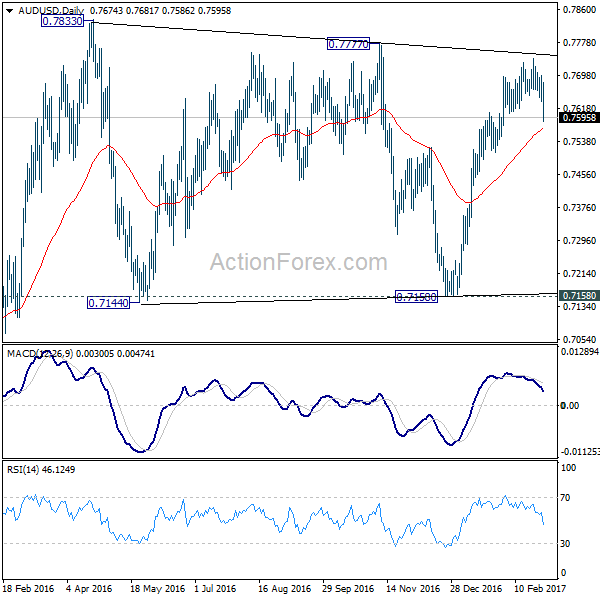