The forex markets are pretty steady in range as another week starts, as usual. Euro surged to highest in more than two years against Dollar last week as aftermath of Jackson Hole symposium. The common currency retreats mildly today but remains firm across the board. Focus will turn back to economic data this week first, in particular job data from US. So far, EUR/USD is in health up trend to take on 1.2 handle next. Attention will be on UK and EU and another round of Brexit negotiation starts. In response to the criticism on lack of clear positions, Prime Minister Theresa May’s government released seven policy papers ahead of the meeting. And officials on both sides would have to expedite their work in order to make enough progress to start the talks on post Brexit trade agreements in October. EUR/GBP is facing 0.9304 key resistance for the moment. Negative news out of the negotiation could power the cross through this level.

To briefly recap Jackson hold symposium, Fed chair Janet Yellen didn’t touch on monetary policies. Instead, she made use of this high profile situation to defend the post financial crisis regulations. Her speech is seen as a pledge that if she’s given a second term as Fed chair next February, she will continue with the tough regulations. Similarly ECB President Mario Draghi didn’t touch much on monetary policies neither. Draghi main focused on emphasizing openness to international trade and warning on a turn towards protectionism. More in Business Back to Usual after Jackson Hole, EUR/USD Surged to New High

Cleveland Fed President Loretta Mester urged the central bank to keep up with the path of gradual rate hike. Mester warned that "there’s some risk that if we wait too long we can find ourselves in a bad spot." And, "we have to move policy a little bit before we get to the goals or else we’re going to get behind." She pointed out that "we’ve had a couple of weak inflation reports lately, but you can point to some one-off factors." But she expected "inflation to remain below 2 percent over the next couple of months or so, in the near term, and then eventually to rise up to our 2 percent goal."

BoJ Governor Haruhiko Kuroda said in a television interview that 4% growth cannot be sustained and "around 2% growth is likely" for the country. He hailed the yield curve control frame work as "well managed" and noted that "despite the wide fluctuation of long-term interest rates in Europe and the United States, Japanese 10-year JGB interest rate has been very flat, around 0 percent." He also noted that the JGB markets are "functioning quite well" in spite of the central bank’s massive asset purchase program. Meanwhile, he pointed out that "since JGBs remaining in the market is going to decline, that means that with one unit of JGB purchase, the impact on the interest rate could be bigger." Hence, "in coming months there will be less and less need to purchase JGBs in order to maintain the yield curve."

US non-farm payroll as main focus this week

Looking ahead, the economic calendar is full of important data this week. US non-farm payroll is a key feature. Fed is widely expected to start unwinding the balance sheet in September and this won’t be changed by a month of good or bad NFP reports. The main question for the market is whether Fed will hike interest rate again this year in December. Based on market pricings, investors are not too convinced with it. It will be difficult for Fed to raise interest rates again given the uncertainties with fiscal policies of the White House. And more importantly, Fed will need a couple more months see if a bounce back in inflation before acting. So, we believe that risks remain skewed to the downside for Dollar regarding NFP. That is, a month of strong set of NFP numbers won’t give the greenback a sustainable turn around. But an downside surprises could trigger another selloff in the Dollar.

Intraday bias in EUR/GBP remains on the upside for 0.9304 key resistance next. We’d remain cautious on rejection from 0.9304 to extend the medium term consolidation pattern. Break of 0.9184 will turn bias back to the downside for pull back to 55 day EMA (now at 0.8948). However, sustained break of 0.9304 will confirm up trend resumption and pave the way to 0.9799. 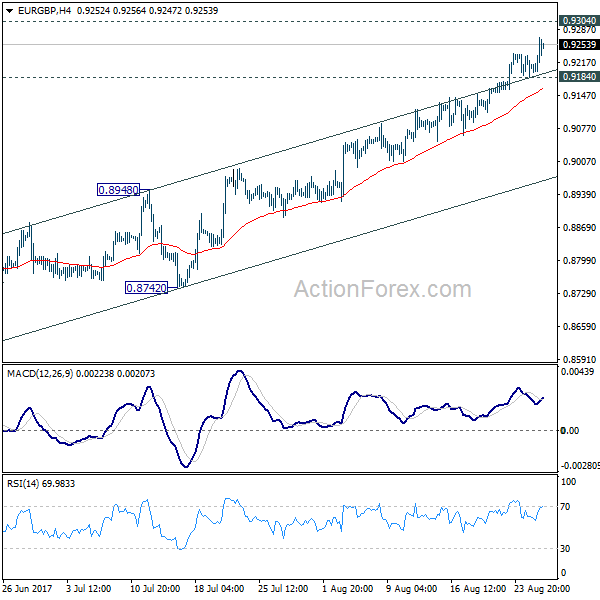 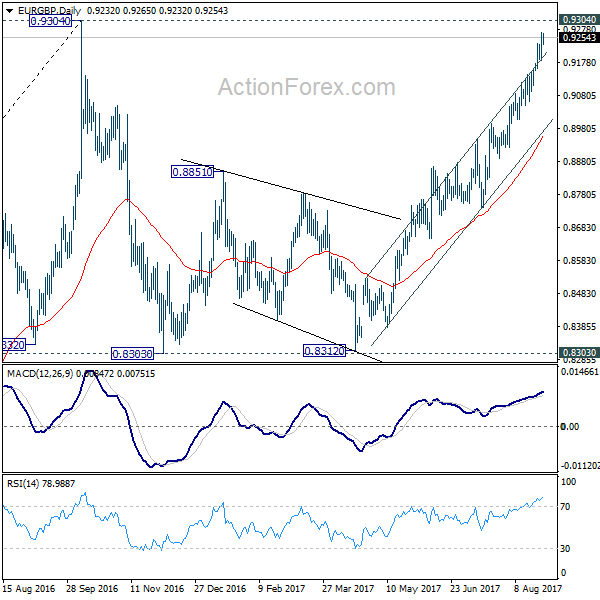