Dollar is trading firm is Asian session today and maintains overnight gains inspired by positive ADP and GDP data. That was accompanied mild strength in stocks, with DOW closed up 0.12%. 10 year yield also edged higher by gaining 0.007 to 2.143. Dollar index dived to as low as 91.62 yesterday but seems to be getting strong support fro 91.91/3 key level and rebounded. The key will lie in tomorrow’s non-farm payroll report. As risk aversion eased, Yen is trading in red against all other major currencies for the week, except Canadian Dollar. Gold also pares back much of this week’s gain and is back pressing 1300, after hitting as high as 1331.9 earlier in the week. The Loonie is weighed down by weakness in oil price which sees WTI dips to as low as 45.58.

Trump laid the onus on Congress for tax reform

US President Donald Trump finally made his first major speech on tax reform yesterday. Trump highlighted a few key targets including simpler tax codes, lowering tax burden on US businesses and cutting rates, cutting tax rates for the middles and bring back overseas parked cash. He painted the picture that lowering business tax rates will boost job growth and wages. However, there was practically no details on the plan. Additionally, there was no counter arguments to claims that his proposal would eventually help the wealthy the most. Instead, Trump laid the onus on Congress and said he’s "fully committed to working with Congress to get this job done" and "I don’t want to be disappointed by Congress".

EU Verhofstadt: Brexit transition can only be status quo

Guy Verhofstadt, European Parliament’s Brexit coordinator, said that the negotiation won’t have sufficient progress by October "if it goes very slow, as is the case at the moment". And he criticized that "if only one party around the table is putting a position and the other party is not responding then it is difficult to start a negotiation." At the same time, he also pointed out that "the more and more time we lose in the coming months, the more and more it is clear that the transition period can only be the prolongation of the existing situation, of the status quo."

UK Brexit Secretary David Davis called for being "flexible and imaginative" to resolve the negotiation deadlocks. But EU chief negotiator Michel Barnier expressed his frustrations on the topic. Barnier said that "to be flexible you need two points, our point and their point," and "we need to know their position and then I can be flexible." And Barnier insisted that the guidelines on the talks were designed for "serious and constructive negotiations" and urged "clear UK positions on all issues".

The third round of negotiation will conclude today. It seems there is still quite some distance to achieve significant progress for EU to give green lights to start the talks on trade agreements in October.

BoJ board member Takako Masai  said that there is still "some distance" to achieve the 2% inflation target. However, she believed that "momentum towards achieving the target is strengthening." Steady rise in household income and tightening job markets will eventually boost domestic demand and push inflation up to target. BoJ has repeatedly pushed back the timing for hitting the 2% inflation target. And now, the central bank projected it will be achieved by March 2020. Masai said that the delay was "unfortunate" and emphasized that it’s important to "pursue policy to lay the groundwork for achieving 2 percent inflation."

New Zealand ANZ business confidence dropped to 18.3 in August, down from 19.4. That is, a net 18.3% of firms surveyed expect general business condition to improve over the coming year. ANZ bank chief economist Cameron Bagrie said that theses are "healthy readings for confidence, activity expectation, investment and employment across all sectors and regions". And, there is a broad-based economic expansion in operation".

RBNZ governor Graeme Wheeler said yesterday that "a lower New Zealand dollar is needed to increase tradables inflation and help deliver more balanced growth." And, "the appreciation in the exchange rate has been a headwind for the tradables sector and, by reducing already weak tradables inflation, made it more difficult to reach the Bank’s inflation goals."

China official PMI manufacturing rose to 51.7 in August, up from 51.4 and beat expectation of 51.3. Official PMI non-manufacturing dropped to 53.4, down from 54.5. Japan industrial production dropped -0.8% mom in July, versus expectation of -0.3% mom. Australia private capital expenditure rose 0.8% in Q2. New Zealand ANZ business confidence dropped to 18.3 in August, down from 19.4. UK Gfk consumer confidence rose to -10 in August.

Intraday bias in USD/JPY stays neutral as it’s bounded in range of 108.26/110.94. With 110.94 resistance intact, near term outlook stays mildly bearish and deeper decline is expected. Firm break of 108.12 support will resume the whole corrective decline from 118.65. In that case, USD/JPY will target 61.8% retracement of 98.97 to 118.65 at 106.48. Nonetheless, considering bullish convergence condition in 4 hour MACD, break of 110.94 will indicate near term reversal and bring stronger rebound back towards 114.49 resistance. 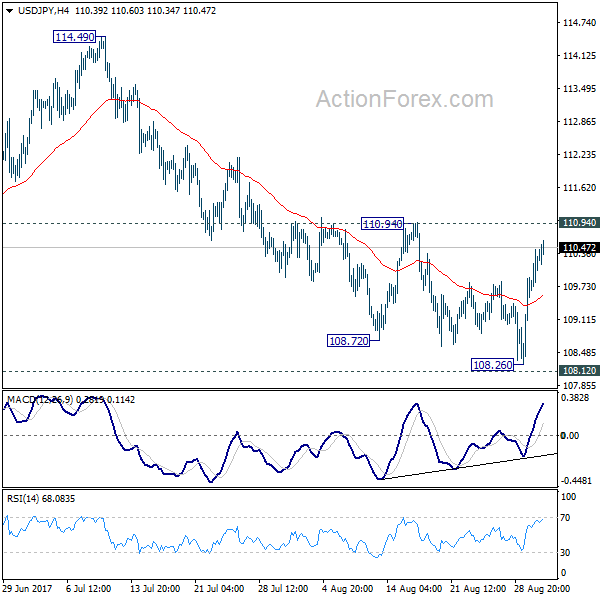 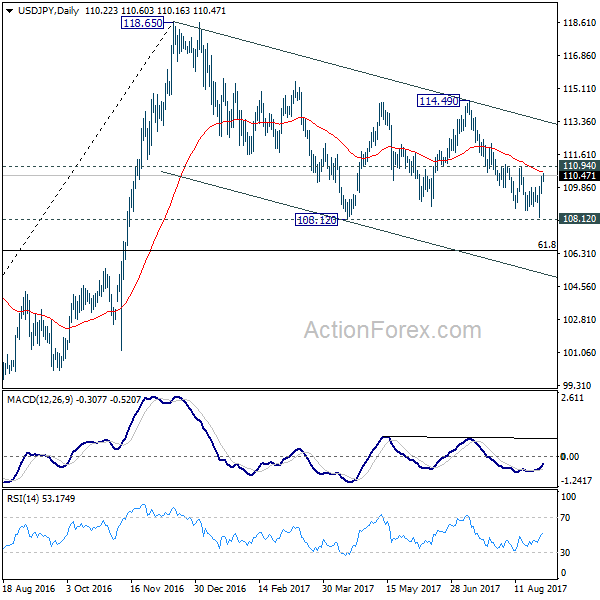