US Yields Tumbled on Trump Correction, NFP Next

US treasury yields tumbled sharply as markets corrected the post election rally. Surge in yields since November was driven by anticipation of Donald Trump’s policies of higher spending, lower taxes and higher debt. Markets seemed to turn cautious as Trump prepares to take office later in the month. 10 year yield dropped to 2.368 comparing to December’s high at 2.621. 30 year yield also dropped to close below 3.000 handle at 2.962, comparing to December’s high at 3.196. The development dragged Dollar broadly lower with the dollar index hitting as low as 101.30. The developments confirmed that yields and Dollar turned into a correction phase which could last for the the rest of the month. It’s doubtful whether a strong non-farm payroll report could trigger sustainable comeback in the Dollar in near term. In other markets, gold rode on Dollar weakness and reached as high as 1185.9. DJIA continued to stay in tight range below 20000 handle.

TNX’s sharp fall and break of 2.424 support confirmed short term topping at 2.621, on bearish divergence condition in daily MACD. Deeper decline is now in favor in near term to 55 day EMA (now at 2.257). But we’d expect strong support from 38.2% retracement of 1.336 to 2.621 at 2.130 to contain downside. Nonetheless, consolidation from 2.621 should extend for a while in near term. And break of 2.621 is needed to confirm up trend resumption. Otherwise, near term outlook will stay neutral at best. And such development would limit strength in the greenback.

Non-farm payroll report from US is the main focus today. The US economy is expected to add 178k jobs in December. Unemployment rate is expected to rise back to 4.7%. Average hourly earnings are expected to grow 0.3% mom. Looking at other job data, ADP report was a disappointment, showing 153k growth in private sector jobs missing expectation of 175k. Employment component of ISM services also dropped sharply to 53.8, down from 58.2. However, employment component of ISM manufacturing improved to 53.1, up from 52.3. Conference board consumer confidence improved to 113.7, up from 109.4. There are more risks of downside surprises in today’s NFP report. US will also release trade balance and factory orders.

USD/JPY weakened against but stays above 114.76 support. Intraday bias remains neutral for the moment. Outlook stays bullish with 114.76 intact and further rise is expected. Above 118.65 will extend the whole rise from 98.97 to 125.85 key resistance next. However, sustained break of 114.76 will confirm short term topping and bring deeper pull back to 55 day EMA (now at 112.76) and possibly below. 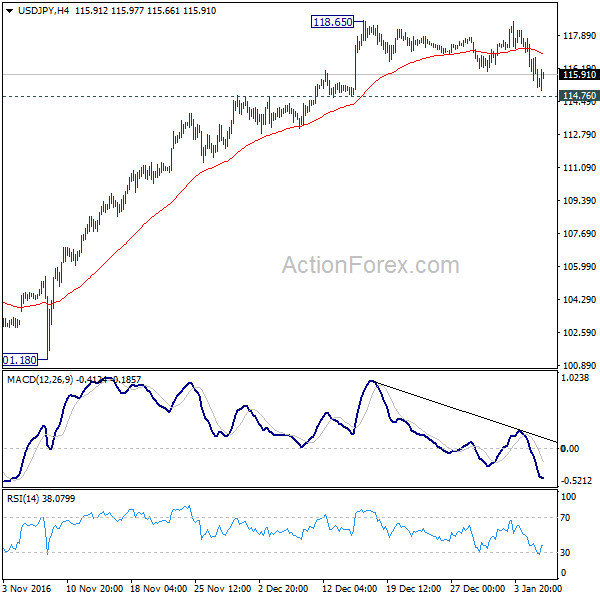 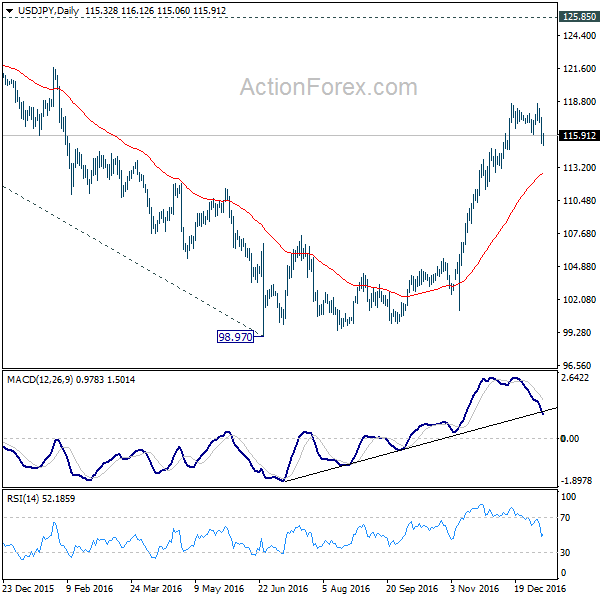